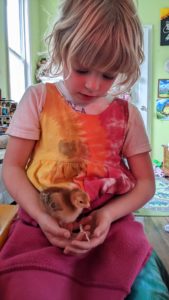 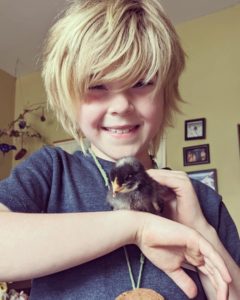 This week’s blog post is from our dear friend and colleague, Mary O’Connell. Mary has a non-profit farm education program and LifeWays Representative site at Paradise Farm in West Bend, where she and her colleagues provide outdoor, farm-based education to children and adults.

Earlier this Spring, we decided to do something different, fun and hopefully meaningful for families in our farm program. We asked for volunteers to foster our baby chicks for several weeks until the little egg layers were old enough to move to the farm. Four families signed up to foster four chicks each, and finally the day arrived when they eagerly took home their little charges. The children quickly became attached to their chicks, named them, fed and watered them, cleaned their cages, and brought them outdoors for brief play periods. I was equally delighted to delegate chick care to the foster families. Raising baby chicks is a lot of work – they poop a lot, mostly in their drinking water. They need care several times a day. At an already busy time of year on the farm, taking care of baby chicks can start to feel burdensome. Happy children caring for the chicks at home? A win-win!

As the novelty wore off for the foster parents – did I mention that baby chicks are a lot of work? — the chicks came back to the farm to move into their new outdoor digs. We had a new coop we planned would give the fledglings some space from our more territorial older hens until they were acclimated to the farm and ready to integrate into the flock. One sunny morning the kids helped get their chicks installed in the new coop and said their goodbyes. A couple of little girls (who I will call N and I) were sad to part with their beloved chicks. I reassured them that their chicks were in excellent hands, and they could visit them when they returned to the farm program the following week.

A few short days later, 14 of the 16 young hens were found lying lifeless in the yard, the result of a predator attack.

As heartbreaking as it was to realize that we had let our baby chicks down, and as disappointing as it was to lose livestock that we had already significantly invested in, I have been doing this farming gig long enough to have developed some equanimity around animal deaths on the farm. As is usually the case when animals die unexpectedly, a valuable lesson was learned, and next time we would know how to do it better.

But how would we break the news to the children? Over the next couple of days, I kicked myself for undertaking this chick fostering experiment in the first place. The children saw these birds as pets, not livestock, and this loss was going to be devastating for them. Over and over in my mind I replayed my conversation with the children who had been sad to leave their chicks at the farm. “Don’t worry, we’ll take good care of them,” I had told them. Ugh.

I felt a certain kinship with the parent who buys a parakeet that looks exactly the same as the one that died and hopes the kids won’t notice. And yet I knew that learning to experience death and loss is just as much a part of farm education as plucking ripe red raspberries from the vine or tasting the first sweet maple syrup of the season. I emailed the children’s parents and shared the sad news, asking them to tell their children about the deaths of the chicks before coming back to the farm the following week. In the email, I offered a few suggestions about how to talk to their children about it, and one parent responded with the name of a picture book to check out from the library about a little girl who loses her chickens to a predator. Parents began reporting back that their children were sad but taking the news pretty well.

N’s mom reached out to let me know that when she told N about the chicks, the first thing her daughter said was, “I want to call I.” N and I talked on the phone for almost an hour. They talked about their chicks, how much they loved them, and how sad they were. They processed everything they were feeling together, and by the end of the phone call they were both feeling much better. N’s mom said to me, “Although it’s a tough conversation, these talks about life and death at the farm are good lessons for them.”

Educators and parents often wonder how to foster resilience in children who live in a modern world that offers so many conveniences and opportunities for instant gratification. It’s quite possible in our entertainment-saturated world to think you can avoid suffering and pain if you do it right. Our society’s coping mechanisms of pills, addictions and other distractions are the result of this kind of flawed thinking. Pain is part of life, and I learned by observing N and I that resilience is not about avoiding painful situations or not feeling things deeply. Resilience is about feeling the pain and asking, “What do I need in order to process this pain?” For these two girls, they needed their friend.