Early in the morning, at 8 o’clock,

You can hear the postman knock.

Up jumps Ella to open the door, 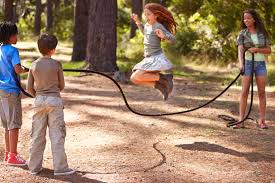 Do you remember jump roping at recess as a child? Or playing hopscotch or four-square? Red Rover or kickball? Until about eighth grade, I spent most of my recess time playing these games but I fear they are quickly disappearing from recess playgrounds. I don’t want to hyperbolize, or even generalize, the trend, but I have noticed many schools over the course of my oldest son’s life (he’s fourteen now) that have eliminated either the games or the balls, or created rules that all but prohibited that type of play. Recess has become significantly restricted in some schools and I wonder what are the consequences of this and how far do they reach?

The question remains to fully be answered, though there is much to discuss about it already. What could be most helpful without answering them is perhaps simply examining what value some of these games have so that we really understand what is being missed in eliminating them.

This was one of my favorites, and while there was a limited number of jump ropes on our playground, we also thoroughly enjoyed a unit of jump roping in PE. This is where I eventually learned how to double dutch and, boy, do I wish I could still do it! There is so much valuable development contained in the game of jump rope.

Let’s imagine through it. First and foremost, any activity that requires movement develops a child’s sense of self-movement. This is the sense that communicates that we are in motion, and feeds into the ability to follow, or follow through with, any movement. This includes a story, a set of instructions, and so forth. With the impact of hitting the ground, jumping rope activates the proprioceptive system that sends messages to the brain to create a map of the body. A fully formed map of the body is necessary to carry out movements with full consciousness of where the body is in space, both in motion and in stillness, and how to respond properly to stimuli.

As we are jumping rhythmically, we are timing when to jump based on our visual cues (turning of the rope) and auditory cues (sound of the rope on the ground) as well as an internal sense. Finding and following the rhythm is intimately connected with both our physiology and soul life. Children are about six or seven when they begin jump roping, which is also the phase of childhood in which they are developing the rhythmic system. The circulatory, metabolic and respiratory systems are all dependent upon a healthy rhythm that is consistently tested and strengthened. Bringing the body into a healthy rhythm, simultaneously brings rhythm and sense of peace to the Feeling life, which resides with the soul.  It is easier to manage the ebb and flow, waxing and waning of emotion and eventually develop a healthy sense of objectivity with it when one has healthy rhythms in life. If we add in singing or chanting a tune to the jump rope, the rhythmic system is further challenged and the soul further nourished by the quality of the music.

This is also related to another form of rhythm in the game. In the act of jumping itself we are also timing a cycle of finding levity and giving way to gravity. These activities are tied to what Audrey McAllen referred to as the stretching-lifting organism. To me, this polarity describes how we meet the world with our will, and in its balance reflects that we are home in our bodies. For example, if a child has difficulties “lifting” themselves up in a jump, there is too much gravity and something is imbalanced. The activity of jump rope gives them an opportunity to bring harmony.

Lastly, it’s important to also consider how much kids still want to play as they get older. For a variety of reasons, there seems to be a general misunderstanding that children are uninterested in playing as they approach adolescence, when this simply isn’t true. They are most certainly interested and truly still continue to play when given the opportunity. The only thing that changes is what form their play takes. Jump rope is a game that can be greatly enjoyed by children of a wide age range as it can become varied and complex as skills levels rise.

There is so much happening during a simple game of jump rope, probably more than I’ve expounded upon just now. I didn’t even begin with what’s happening when you start dividing your focus and changing moments to include two jump ropes in double dutch! Imagine that one! There are also cooperative and social aspects of the game that I didn’t cover, but I will leave that to the next type of playground game. Until then, grab a jump rope and get busy with your kids! Find out what they’re allowed to do at recess and if it doesn’t include jumping rope or other classic games, start advocating for a change.