Each of us is carving a stone, erecting a column, or cutting a piece of stained glass in the construction of something much bigger than ourselves. – Adrienne Clarkson 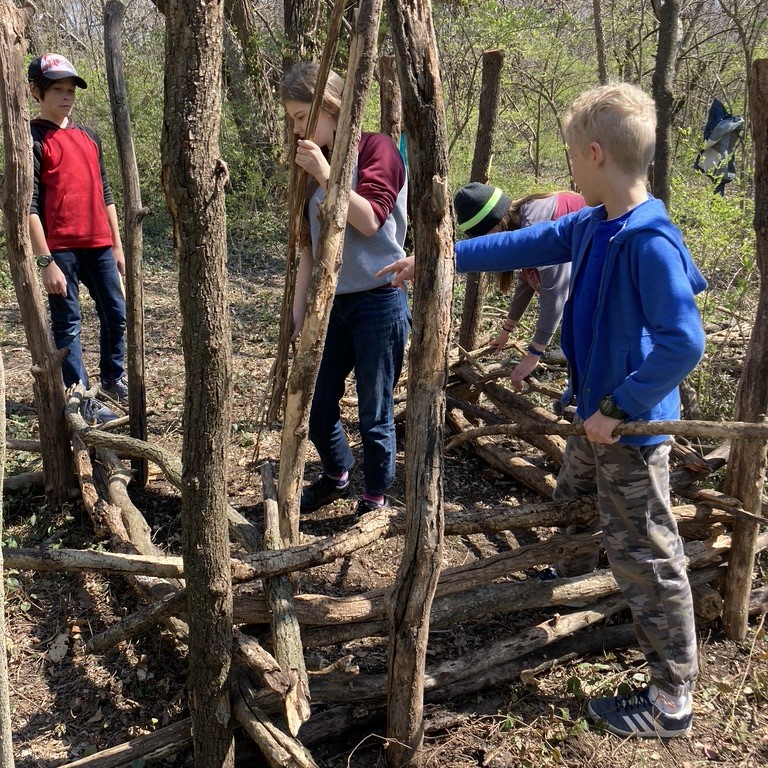 Did you ever build an outdoor fort or tree house when you were little? Or a blanket-and-sheet fort indoors? I’ve been wondering about why this activity is so appealing to us as children. When very young, it seems for a time children are building forts as their bodies are also being built. As their organs are maturing and their bones are strengthening, there arises a security and solidity that must be reflected in the world outside of themselves. At some point, fort building comes at a special moment of manifesting the grand plans of the imagination. I remember the six- and seven-year olds at Rose Rock directing and delegating tasks to peers of all ages as they collectively constructed forts and machines of all sorts.

As children grow, the impulse to leave their mark on the world grows. Sometimes this comes through destruction, which has its place, but more often may be directed to more productive and constructive results. Fort building, in a more sophisticated form, serves as an avenue to both manipulate the world around them and become masters of skill. For older children, Ii’s a great opportunity to learn the thrilling work of hand tools, such as hand saws and hatchets, and to practice skill sets such as planning and basic engineering. It also requires leadership, cooperation, flexibility and perseverance.

In my homeschool enrichment class on Fridays, we have been fort building since late Winter. It began spontaneously, when someone else erected several large branches into a teepee form and both classes completed the structure with cross pieces. After observing their enjoyment of the activity but lack of organization, I decided we would give the activity a second try. This time I suggested they plan a design for their fort, and gently guided them through the process of construction. It was democratic and led by the children- everyone voted, everyone participated. They searched for logs of felled trees, cutting away small branches and dragging them through the park together. They learned how to tell what logs were dead enough to cut through easily but not crumble under any weight. They dug holes and erected posts. They each took turns sawing- some for the very first time- and stacked logs and branches along the sides. They had to determine how to stack logs of varying diameters, and manage their errors. Next week they will create a frame for their roof, which will be made of tarp because they all voted that it would be the safest option, having never made a fort like this before now. 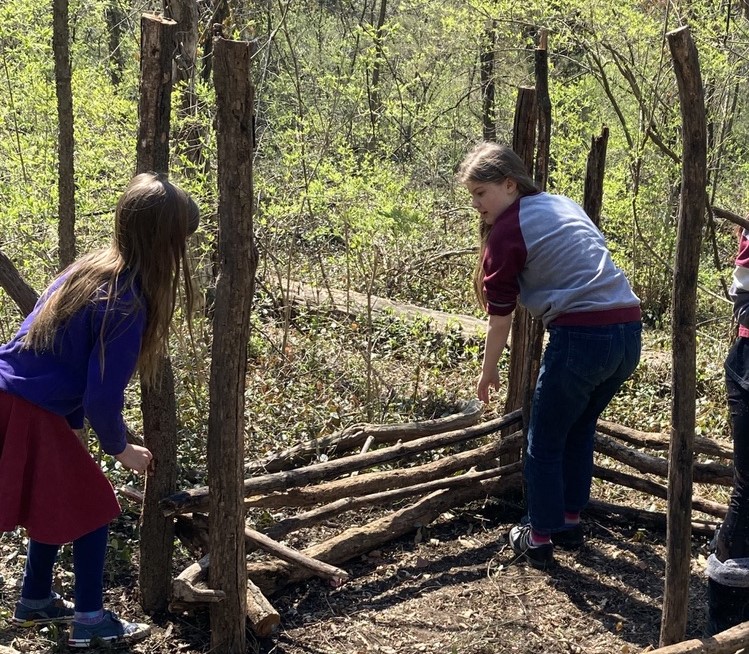 It has been incredibly rewarding to see their different personalities shine during this project. There were leaders taking charge immediately, one more hands-on and one more directorial. Two of them were consistently and cautiously checking the structure’s sturdiness (and expressing most strongly about that roof). One was most content taking direction and even though she was certain she wasn’t great at any of it, still managed to dig in to every step just to be helpful. There were observers who needed to be encouraged, and dreamers who loved the searching and planning, but needed coaxing to get more into the manual labor. Yet, everyone was willing and everyone has been amazed at the results of their work.

From now on, the fort will be our meeting place for stories and lunch, and at completion, it will be blessed with a name. In consideration of a name they asked me, “Do you know any ancient greek? We want to know how to say ‘long time’ in ancient greek because it took us such a long time to build this!”

Well, the Greeks had two words for time. Chronos is at the root of English words such as chronology, and measures quantitative time. Kairos, however, is called “deep time,” where the present is so rich that chronos time seems to disappear altogether. It is measured in times of laughter shared with friends, or moments alone, closing your eyes in the dappled sun as you swing under a tree. It is the time spent watching a perfect sunset on the lake shore, or the memory of your mama singing… So now, I will bring them one last decision to make together. Is this fort going to be remembered as Polys Chronos, or Polys Kairos?

I do hope this inspires a little fort-building in your own programs and backyards. Happy Spring!