It is remarkable how closely the history of the apple-tree is connected with that of man.  – Henry David Thoreau, from Wild Apples: The History of the Apple Tree 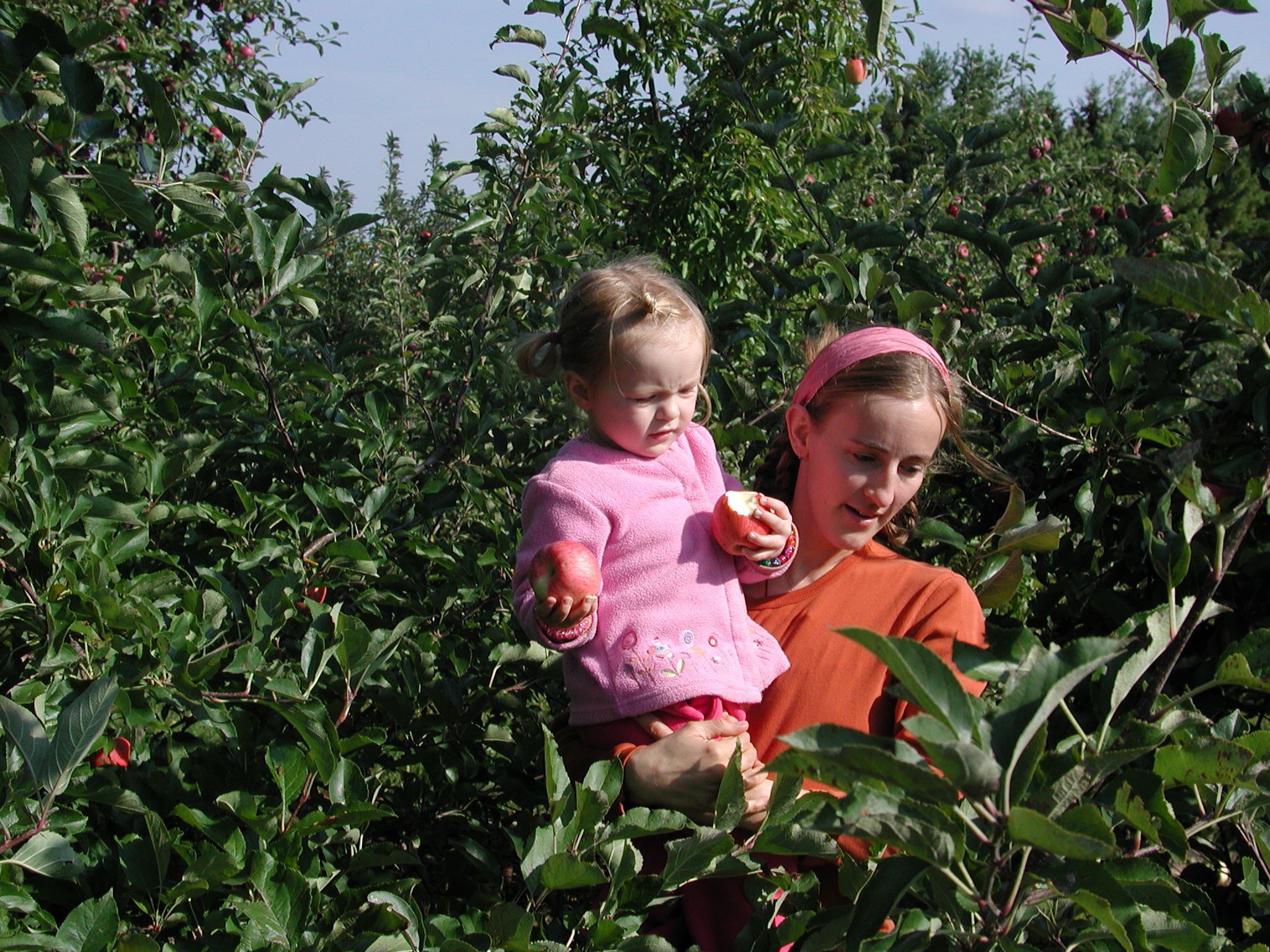 Ah, the apple! Is there any other fruit so widely exalted in the history of symbolism and  mythology? Apples have a prominent place in the mythologies of all the major western ancient civilizations, as well as some Asian and Middle Eastern. They have been so widely eaten, written about, and extolled throughout history that at some point the word “apple” simply became synonymous with “fruit” and it’s now questionable as to which fruits were actually being referred to in some stories and historical accounts! What is it about the apple that makes it so notable?

Full of goodies for your body, it is sustaining and wholesome. Sweet, tart, and crisp, it offers interest and variety. It’s also an incredibly adaptable tree. Originating in Kazakhstan, the wild apple tree has been around for millions of years, and it was domesticated over 4,000 years ago. Currently, it is grown all over the world in over 7,500 varieties. The apple endures. Thoreau is credited with calling the apple the noblest of fruits, and while I am uncertain he said this exactly, Wild Apple, his historical account of the apple tree written for the Atlantic in 1862, gives no doubt that he likely felt this way. While a lengthy read, it proves enjoyable and fascinating under the shade on a crisp autumn afternoon, and gives me much to ponder about this worthy fruit.

For all the stories and facts about apples, though, what I particularly appreciate is that the apple shares this season with Michaelmas. Peracelsus, who made great contributions to the field of medicine, once said about man:

“Man is a seed and the world is his apple; and just as the seed fares in the apple, so does man fare in the world, which surrounds him.”

I imagine us the five-pointed star of seeds found at the apple’s core. I imagine the qualities of the apple surrounding- juicy and nourishing, bruised or wrinkled, crisp and young, or decaying. I imagine our macrocosm, here, and consider what more he says about man:

“Man is a microcosm, or a little world, because he is an extract from all the stars and planets of the whole firmament, from the earth and the elements; and so he is their quintessence.”

We are both a part of the macrocosm and separate from it, having a unique opportunity to be the apple seed and to plant our own “seeds” as the deeds of this lifetime. How will we fare? How will our seeds, and their seeds, and their seeds after fare, as they live beyond our years and shape this Great World? With the Spirit of Michael in our hearts we courageously take up this task. 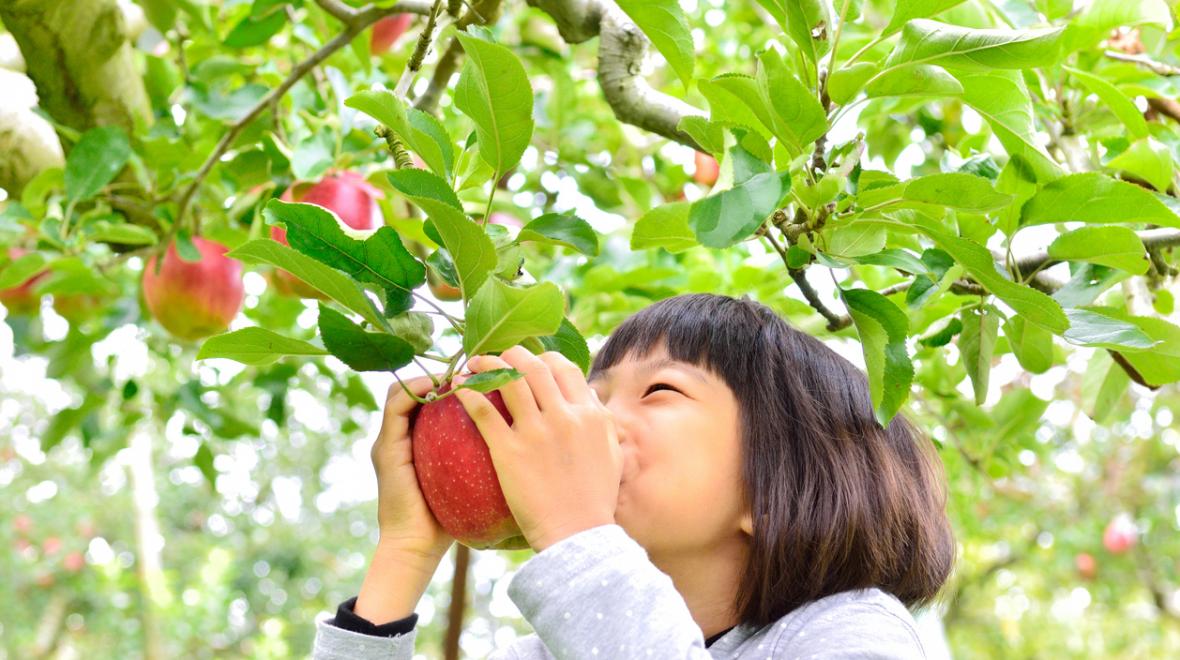 There is, indeed, much to celebrate about the apple, and many ways to do it. With our young children, it may be a simple and reverential acknowledgement of the season. When we originally lived in Kansas City, we visited a local orchard annually to pick our own bushels full. I remember keenly the first time we did this with our oldest son. At about 18 months, he looked like a little old man in his jacket and jeans, red basket in hand, wandering through a flock of chickens to grab at the fallen fruits. We visited every year, his younger brother joining along when he was born, until they were six and three, and we moved to Oklahoma. The u-pick options there were sparse and as we added son number three to the mix, the annual trips fell out of tradition. We are eager to pick it up again now that we are back in Kansas City. 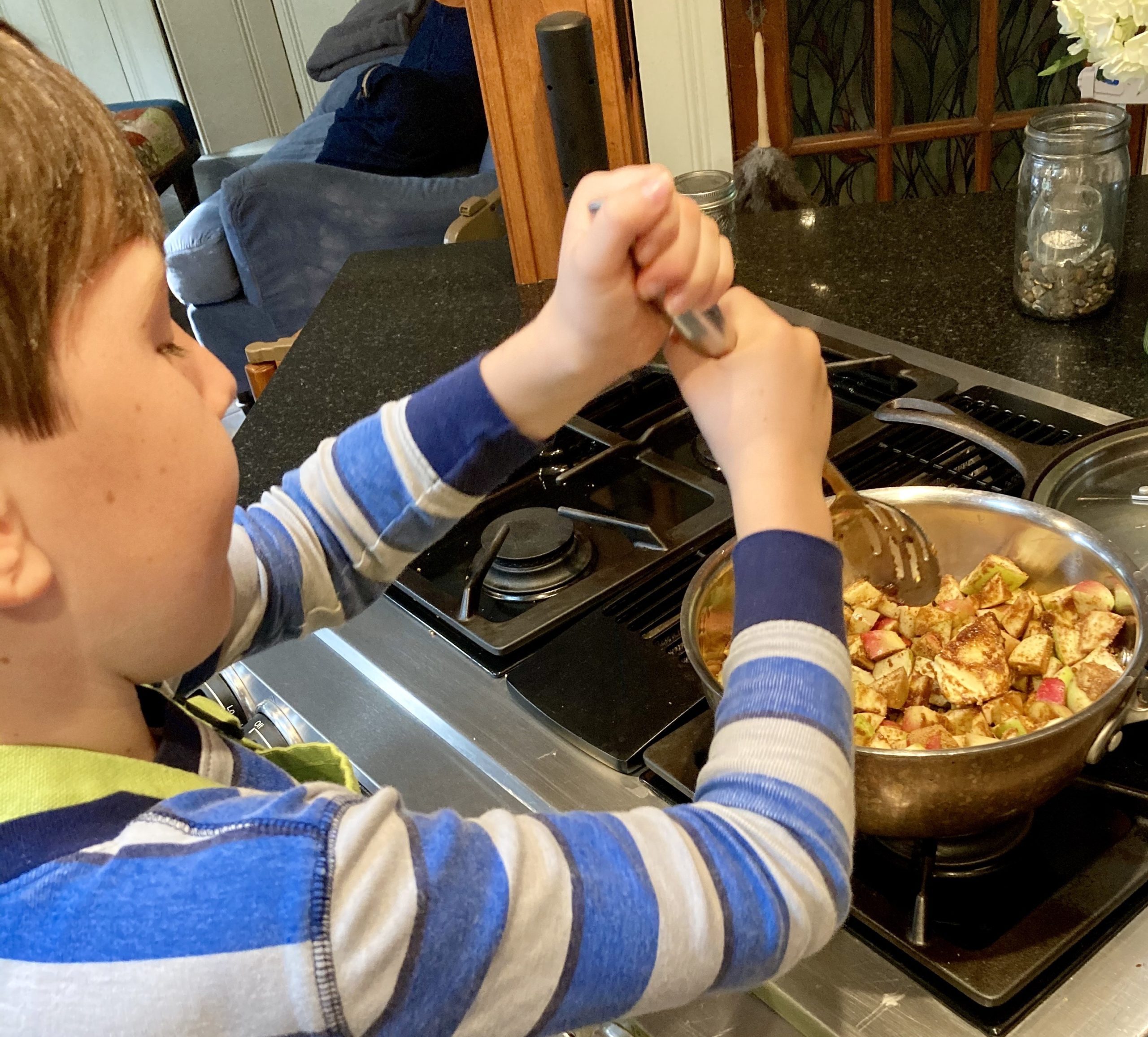 One does not need an orchard to visit, however, to celebrate the apple. As we all know, the baking and cooking options alone are boundless. Who doesn’t have a favorite apple-something recipe? Aside from the standards, we like to try new recipes, too. This year we made apple turnovers with some fresh apples from the market. I love baking with young children, and that love has definitely rubbed off on my youngest. He was born thinking about food- literally, he was born at lunchtime! The activities of baking, though, offer so much to his developing senses, coordination and concentration. Being a “seasoned baker” I thought the turnovers were a real treat for him, since they require more steps and time (twice we had to chill the ingredients!) compared to the ease of sauces and quick breads. The idea of a mini-apple pie with extra crust that you can hold in your hand to eat was almost too much for my youngest son! He was all for it. 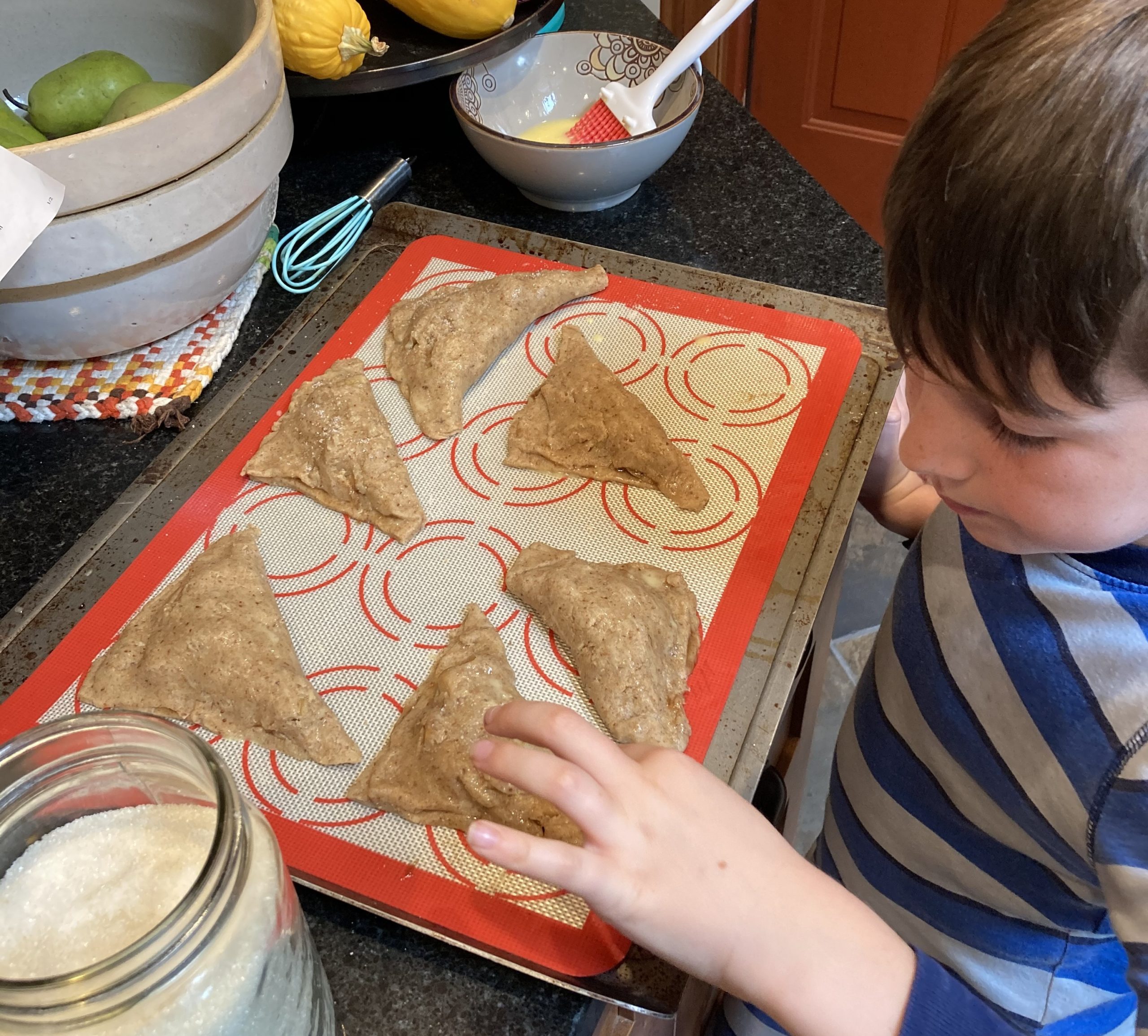 My son took part of every step, but especially enjoyed being at the stove- since it means he is so big now- and rolling out the dough. Our results were a super tasty and nutritious snack since we made some adaptations to the standard pastry dessert. As usual, half of it ended up on his cheeks and we both decided it was a heavenly way to celebrate the apple! 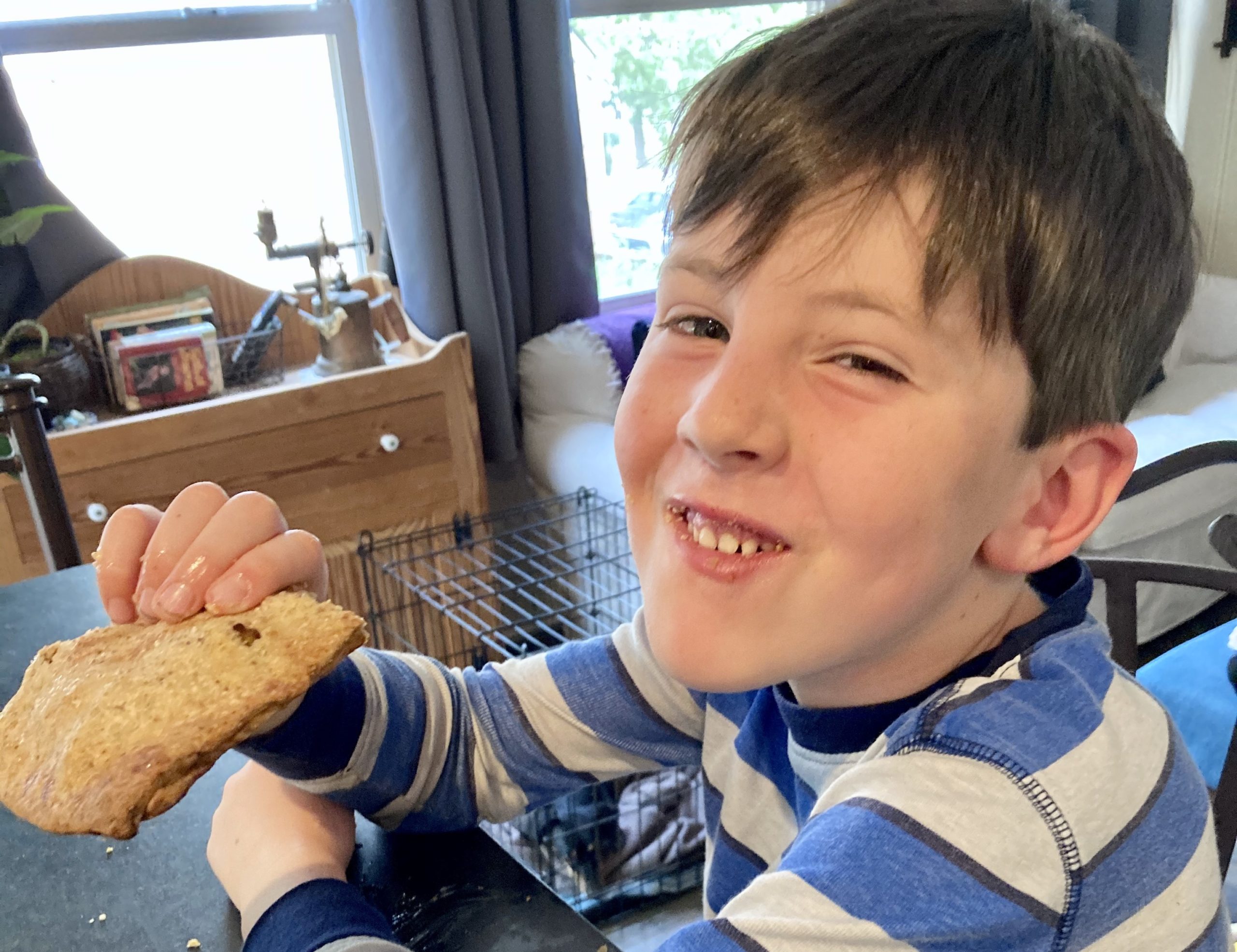