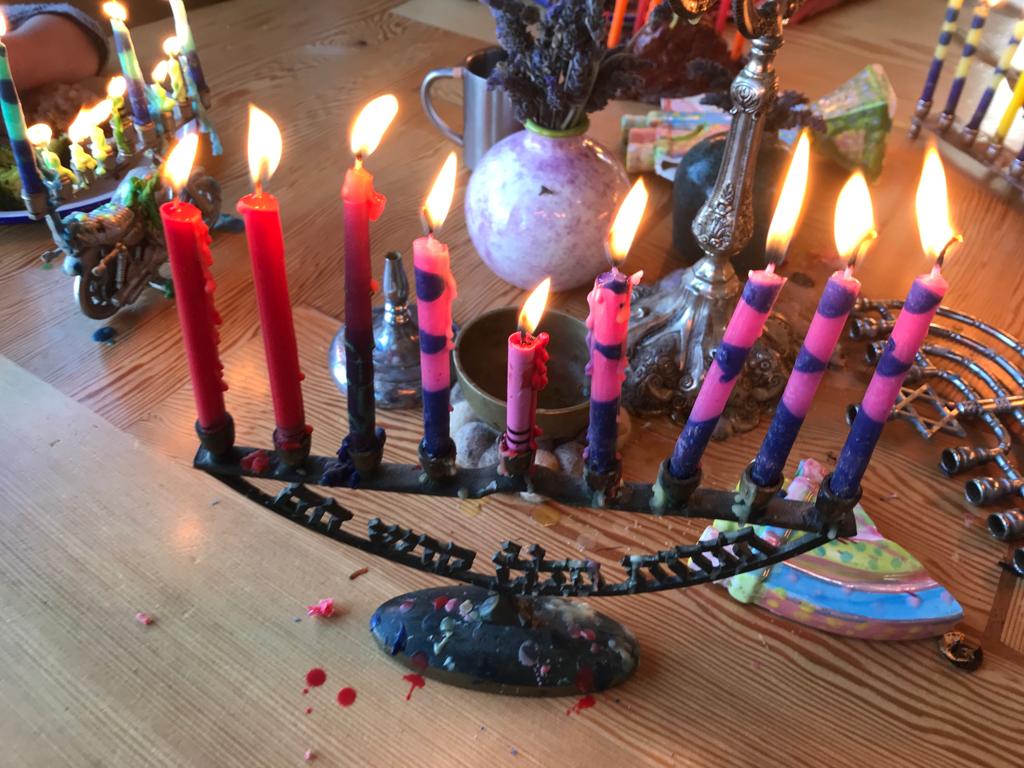 A long time ago, in a place far, far away, there was a village where all different kinds of families lived together in peace and harmony.

All around the garden were vineyards and orchards of trees. And the olive trees were the most special of all. When the olives were ready, the community would pick them, and prepare them, and press them into olive oil. And then it would take eight days to bless the olive oil. This was very special olive oil because it was used to light the giant menorah in the synagogue. And the lights of the menorah always stayed lit.

One day, a new king came into the land. His name was King An-TIE-ochus, and he did not want there to be any more Jewish people in the community. He wanted everyone to be the same.

This made the Jewish people feel very sad. And not only the Jewish people … but all people who cared about freedom and kindness. Many people in the community did not share the king’s belief that everyone should be the same. (That would be funny and boring if everyone was exactly the same!) They liked living with many different kinds of families in their community who celebrated all different kinds of festivals.

But King Antiochus was scared of differences that he did not understand. Instead of trying to listen and to learn about different kinds of people, he just got very angry and said he wanted the community synagogue to be destroyed.

One day, when the community was working together out in the gardens and orchards, King Antiochus led an army of soldiers into the synagogue to destroy the great menorah and everything inside.

When the people returned from working in the gardens, they were shocked to see that their beautiful synagogue had been destroyed by people who didn’t understand how different kinds of families could all live peacefully together.

Some families wanted to leave that community and didn’t want to live in a place where a king could act in such mean ways towards Jewish people. Some families were so scared that they decided they would stop celebrating Jewish festivals and just do whatever the angry king told them to do.

But one family, the Maccabees, said: “No, that is not right. It’s not right that the Jewish families should have to move away or that we should have to stop celebrating Jewish festivals either. We want to stay right here in our own community. This is not a time for being angry or fighting among ourselves. This is a time for coming together. For celebrating who we are and what we believe–and that is, that we want to live lives of kindness and goodness and live in community with all different kinds of people. This is not a time for tearing down, it is a time for building up. For re-building. We need to clean up our synagogue, fix what has been broken, and re-dedicate our sacred space.”

They searched and searched, but all they found was smashed vessels and broken glass. Until young Judah called out, “I found some!” Everyone got excited.

“Oh, but that’s just a tiny amount,” Judah’s brother said. “That’s not enough to even last one day.”

“Well, at least it’s something,” Judah said. “It’s a start. We could begin with this while we’re making some more.”

No one believed the oil that young Judah had found would burn for very long. But, out of kindness and compassion for Judah, they set upright the great menorah that had been knocked over, filled one cup with the oil that Judah had found, sang the traditional blessings all together, and went ahead and lit the oil.

For us, too, Chanukah can be a time of re-dedicating ourselves to keeping hope alive during these darkest days of the year. A time of celebrating and respecting our differences. And rededicating ourselves to working for justice and fairness for everyone. A time of listening especially closely to children and seeing the world through fresh eyes. A time of kindling candles and cups of oil to light our path.

And, to honor the miracle of that tiny bit of oil lasting eight days when it seemed like it wouldn’t even last one night, we spend the eight days of Chanukah eating lots of oily treats– like potato latkes, sufganiyot (special donuts), roasted garlic, pizza and other cheese-y foods! HAPPY CHANUKAH!

Yael Raff Peskin is the mother of three adult children (and a lively 2-1/2 year-old granddaughter!). She is the Director of KULANU Playgarden, a Lifeways Representative Site in Sebastopol, California offering a year-round program for infants to 5 year-olds that brings together nature-based Jewish observance and Zen mindfulness practice into an outdoor Lifeways Waldorf environment.