I believe in fairy godmothers because I have had the good fortune to meet one.  He wasn’t a sparkling lady with a giant grin and a magic wand. He was exactly the opposite. When I was a little girl, mom would sometimes send me to the convenience store to get some milk or the morning newspaper.  I was always happy to oblige, and sometimes there were a few coins left to get a sweet treat.  It was nice to know that my parents thought I was big enough to walk down the busy street and procure the milk (a sort of liquid gold in a house full of thirsty kids).

One frigid morning, we ran out of milk and my hungry siblings and I were not looking forward to eating our Not-So-Tasty-O’s dry.  After some digging in couch cushions and the penny jar, mom came up with the ninety-some cents needed for a gallon of milk.  While it was cold and there weren’t any coins left for candy, I was still happy to help.  I walked along the edge of the sidewalk listening to the ice crackle beneath my feet while little clouds of icy air appeared with every exhale.  Having forgotten my mittens, I kept my hands in my pockets while I strolled along.  As usual, the grandmotherly cashier, Ruth (if I recall correctly), greeted me with a smile and continued her conversation with another regular.  I looked over and there he was, someone I saw often, but I was always sort of guarded around him.  He was an older man with missing teeth, bushy eyebrows, scruffy white hair and layers of dirty, baggy clothes.  I suppose I assumed he was a hobo who lived at one of the camps my brothers and I had explored along the tracks that ran through our neighborhood.  Or, maybe he was just lonely and liked Ruth’s company.

I got the milk from the cooler and eyed up the donuts while Ruth rang it in.  I gave her all of the nickels, dimes and pennies from my pocket and headed out into the cold with my milk in hand.  The air seemed cooler as I walked home with the cold milk in my hands, and the milk seemed heavier than usual.  I scolded myself for forgetting my mittens. I was hungry and wishing I could have a delicious donut rather than the Tasty-O’s that waited for me at home.  Oh well, with the right amount of sugar (a lot) and milk, I could surely choke down a bowl or three of generic cereal.

I was about halfway home when it happened, I dropped the milk.  I 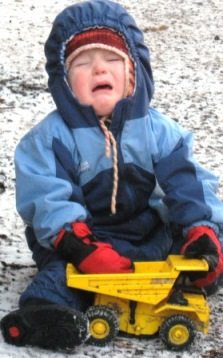 watched as the milk slipped from my frozen fingers in what seemed like slow motion and fell to the pavement.  The plastic jug burst on impact, leaving a puddle of wasted liquid gold at my feet.  Those who know me well know that I am not much of a crier.  Even as a child I cried less than most, burying my face in my hands when I couldn’t hold the tears back.  But, on this day I cried and cried right there on Hawley Road, disappointed that I had dropped the milk, knowing full well that there weren’t enough pennies in the couch cushions to buy another gallon.  How could I have been so foolish to forget my mittens, so weak to drop the milk after only walking half a block?  Clearly, I was not a very big girl after all.  I supposed my older brother would be the one running to the store from now on, buying taffies with the change.  He was so tall and strong, the milk would surely be safe with him.

I must have been crying rather loudly, for I didn’t even hear the old man from the market approaching.  I don’t remember what he said, but I know it wasn’t much.  I suppose my tears and the pool of milk said it all.  The next thing I knew, we were back at the market, and this old man who I assumed didn’t even have a home to call his own let alone a couch cushion to find buried change in, was buying me a gallon of milk.  I couldn’t believe what was happening. I just muttered a thank you and brought the milk home hugging it tightly to my body the entire way.  That day, for the first time, Tasty-O’s lived up to their name.  After that I continued to see the mysterious old man at the store.  I was no longer guarded around him, but I was still shy.  It was as if we shared a secret small, human moment.  I was too reserved to sob around those whom I knew and loved dearly, and yet he had seen me overcome with emotion.  He helped me without being condescending, without damaging my childish pride and dignity.

Since then, I have had more awful moments like the milk dropping.  Times when things have gone terribly wrong and, as much as I wish it wasn’t so, nothing could change what has happened.   In these moments of loss, I think of that pool of milk and the mysterious old man.  Somehow, this man rescuing me as a child has helped prepare me for the moments when no one can rescue me and I have no choice but to carry on and accept what support is given, knowing that the pain will eventually  diminish, learning from my mistakes or simply accepting what is. 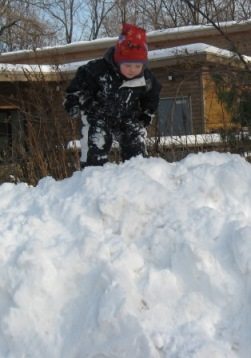 In my work with young children, I hope to build their strength and character as this one small gesture has done for me.  I don’t seek to rescue them from every discomfort or frustrating situation.   I know that people learn from struggling through frustration and overcoming obstacles.  They learn independence, strength, perseverance, confidence and integrity.  There is a time to allow natural consequences to guide them.  No matter how many times I warn the children of the dangers of jumping on the couch, no matter how clearly I forbid it, there are some kids who only seem to believe it when they’ve seen and felt it for themselves.  I can’t and won’t always catch them when they fall.  I want them to learn how to land, how to get back up again.  But, I don’t want to be so cold and so stern that I don’t see the “fairy godmother” moments when they arise and seize the moment to demonstrate true, authentic, human empathy.

Jaimmie Stugard has been a caregiver at the Milwaukee LifeWays for nearly ten years.  She is grateful that she is able to bring her own little ones with her to LifeWays each day.  She is also the music teacher in the Wisconsin LifeWays Training.