For a number of years I’ve been completely in awe of how willing men are to “lean into” physical challenges. Not just football players and soccer stars, but skinny guys and computer geeks as well, as I witnessed a few years ago at a Ropes Course. Our group had to get everyone over a 12-foot-high, smooth wooden wall. While I stood back and thought, “This is clearly impossible,” the men in the group sprang into action, managed to lift one another up to the platform on the other side of the top, and then drag the middle-aged and overweight in the group (ahem) over the top as well. Although I 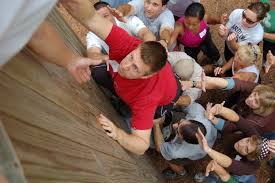 can’t actually remember how they did it—the mind boggles before the clearly impossible—what remains with me is how instantly willing they all were to jump in, work together and give it their all physically, without concern for bruises and aches they might have later.

This very physical orientation to the physical world is something we tend to see more strongly in men and boys.  I found the following explanation from the Steiner folks very helpful in understanding this phenomenon: someone in a male body tends to relate to the world most strongly through the physical and spiritual (ego) bodies, while someone in a female body tends to be more strongly developed in the astral (emotional/relational) and etheric (life force/nurturing) bodies. While everyone can benefit by developing balance, we certainly see this in the preschool when some little girls at 18 months can tell you everyone’s name and who’s missing today and whose hat you’re holding, whereas a couple of four-year-old boys who have been in the program for years still don’t know everyone’s names. 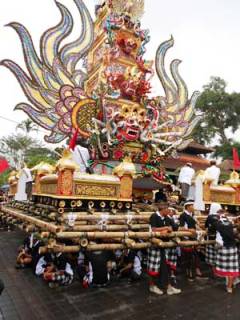 Also, there is often a group of boys who are impossible if you can’t get them outside every day, preferably moving large tree stumps, digging or otherwise interacting strongly with the physical world. Being outside makes it easier for boys to push against the physical universe while still being socially acceptable.

I was recently graphically reminded again of this need of boys and the willingness of men to engage with the physical world while we were in Bali. We were able to watch the cremation ceremony for the king of the region.  In order to carry a fifty-foot-high tower, with the casket in the top, from the palace to the temple at a good trot, about 100 men had to take their places under the float and lift the bamboo all together.  When they arrived at the temple and it was time to unload the casket down a long, steep bamboo ramp, a dozen men sprang up–and strained to keep it from careening out of control. Then a couple of them heaved the wrapped body out of the casket and up into the back of a 20’ statue of a bull for the cremation itself. I was totally impressed, over and over again.

Then, the morning after the cremation, I was called to the clinic for the birth of a baby that was coming face first.  A face presentation is much more difficult than a baby that comes out vertex first, whether face down (usual) or face up (also called posterior, sunny-side-up or star-gazing). While a posterior baby is hard enough, a face presentation invovles a wider diameter, making it even more difficult for the mother. And think how far the baby’s head has to be thrown backwards to have the lips appearing first—and how swollen the face ends up for several days!

This brave and strong mother—a 27-year-old Russian woman, having her first baby—had already been giving it her all through several hours of pushing following 27 hours of slow progress in labor. By the time I arrived, there were nine midwives from five different countries surrounding and encouraging her to continue to push with all her might with each contraction. Everyone was lending her support, and some of us were doing the things midwives know to try to help—creating room between the sit bones or doing fundal pressure. We were all totally there with her and for her—just as the men had been with the casket—and yet, ultimately, she had to do this most physical work herself. And she did.  And when the baby came out, I had to wipe away my tears, as well as the sweat that was running down my face.

Rahima Baldwin Dancy is a founding board member of LifeWays North America and has been involved with Waldorf early childhood since 1980. She is internationally known as the author of You Are Your Child’s First Teacher, now available in a third, revised edition.