Have you ever heard the story of Fiochetto Bianco? It’s a beautiful tale from the publication Tell Me A Story, that fits the mood of Martinmas perfectly. In full form, I would tell it to five and six year olds, and even four year olds if there were older children present to help carry the younger ones along. It is also easily adaptable for younger ages. I would like to share with you the version I have been telling for the past few years. As with any story told repeatedly, it has been painted with a life from my own imagination. I added a simple tune to the shepherd’s call to his lamb and details that appealed to the older children in my care. It makes a lovely puppet show, but can also be told with just a few puppets. 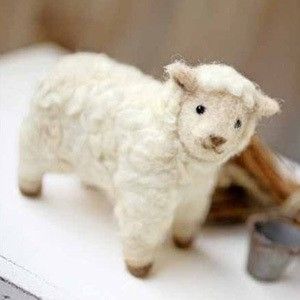 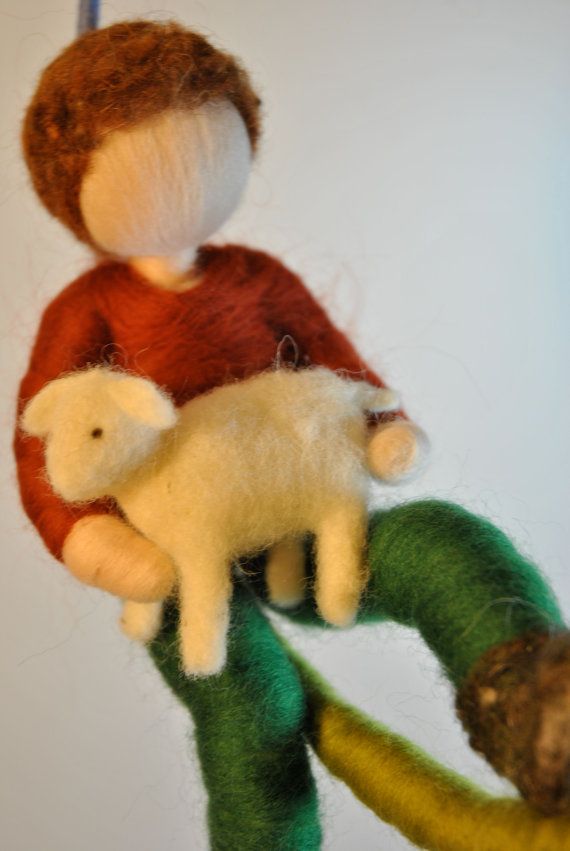 There was once a young shepherd who cared for one little lamb. She was called Fiochetto Bianco, which means “white flake,” for her fleece was clean and white as snow. She wore a little golden bell that tinkled sweet music wherever she went and the young shepherd always knew where she was. Every day was the same for the shepherd and his lamb. He walked her out to pasture where she could eat the fresh green grass and wander the countryside together.

One morning, however, the young shepherd decided to walk a new way. He put on his rucksack and started off with Fiochetto Bianco, up the side of a tall hill. The hill grew rockier and steeper as they went along and while the lamb had no trouble on her four legs, the shepherd grew quite tired climbing rocks with just his two. As they stopped for a rest, he heard a gurgling sound and moved off the path to search for the source. Around some large boulders in the hill, they came upon a spring bubbling up between the rocks. Both the shepherd and the lamb were very thirsty, so they refreshed themselves with the cool water. While Fiochetto Bianco nibbled grass on the banks of the stream, the shepherd boy leaned up against a tree to rest and soon fell asleep.

Evening came and the boy awoke with a start. He stretched and looked about for his little lamb. He did not see her or hear her sweet tinkling bell. He called out:

Yet he heard no answering bleat nor tinkling bell. The shadows were quickly growing long and the first star rose in the dim light. Fiochetto Bianco was nowhere to be found and the young shepherd felt helpless. He sat down upon a rock and began to cry. Through his sniffles he heard a lovely singing and when he looked up he saw a bird alight on an evergreen tree as she finished her evening song. The young shepherd asked the bird, “Have you seen my little lamb, Fiocchetto Bianco?”

“No,” she replied, “I have not. But perhaps she has wandered into the woods. I will show you the way.” The bird flew ahead to show him to a path in the woods, “Thank you!” he called out to the bird as he walked along the soft, mossy path. Once again he called:

Yet he heard no answering bleat nor tinkling bell. Suddenly, he startled at a rustling in the bushes. Was it a fox? Or wolf? But, no, it was a squirrel, fetching nuts for his dinner. “Good evening,” said the shepherd, “Have you seen my little lamb, Fiocchetto Bianco?”

The squirrel shook his head, “No, but perhaps the hare has. I will take you to his house.” And with a flick of his tail, the squirrel bounded off, the young shepherd hustling behind him as best he could in the growing darkness.

“Here he lives, in the roots of the oak tree,” said the squirrel and off he went again, up a tree trunk and away. “Thank you!” called the shepherd, as he turned to knock upon the hare’s small door. The hare was just headed down his burrow to sleep, but turned back to answer.

“Good evening. Have you seen my little lamb, Fiocchetto Bianco?” asked the shepherd.

“No, I have not, but perhaps the owl has. She has keen eyes that can see in the dark. I will take you to her home.” It was even more difficult to follow the leaping hare through the darkness. The young shepherd could just make out his motion and his bouncing white tail.  At last they came upon a great hollow tree.

“Here, the owl lives above in the hollow. Good luck!” said the hare. The shepherd thanked him and he bounded away into the darkness. Now, the young shepherd had to fetch a good amount of courage to call up to a large owl in the dark of night, but he did it just the same.

“Good evening, owl! Have you seen my little lamb, Fiocchetto Bianco?” he called up to the hollow.

“No, I have not,” said the owl, “But I know someone who may be able to help. I will take you to his house.” The woods were completely dark and the owls wings were silent as he flew. The shepherd did his best to follow the owl’s hooting call as they moved further into the woods.

Soon they came to a small house, nestled in between the tall forest trees. Light shone through the windows and the whole house glowed with warmth. The young shepherd felt a glint of hope in his heart. The owl said, “This is Omino’s house. You must knock upon his door three times and call out- Omino, Omino, come out! Please open your door!” 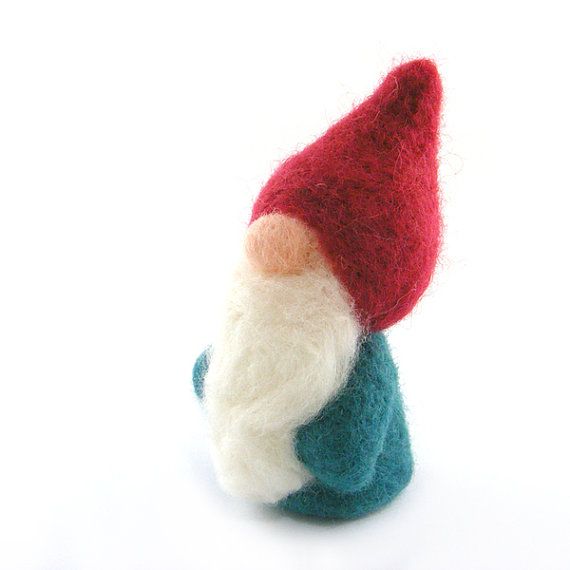 Finding all his courage, the shepherd knocked three times and called out, “Omino, Omino, come out! Please open your door!” Soon the door opened and a stout little man stepped out.  He had ruddy cheeks and a smile under his thick beard. “Good evening,” he said.

“Good evening,” said the shepherd, “Have you seen my little lamb, Fiocchetto Bianco?”

“No, I have not. But I have a good lantern and I will help you look,” replied Omino. Then he turned and picked up a large, glowing lantern and came out into the night. The lantern lit the way and the young shepherd could once again see the path before him. Now he could move along more quickly. They looked around every twist and turn, calling:

Yet they heard no answering bleat nor tinkling bell, not even a rustling in the leaves. The forest was quiet. But as they came to the edge of the trees, a ravine opened before them. As they stopped to listen they heard a faint tinkling. The young shepherd’s heart leapt in his chest.

An answering bleat came from far below, and the tinkling of the lamb’s little bell. Omino held his lantern out low over the ravine. It’s strong light lit every dark corner and they could see the sweet little eyes of the lamb looking up to them. The shepherd climbed down as quickly as he could and scooped the shivering lamb up into his arms. “Fiocchetto Bianco!” he cried as he hugged her close. Both were as happy as could be.

Omino lit the way home with his bright lantern. Thank you for your help, the young shepherd said graciously, “Good night to you.”

“It was my pleasure. Good night, young one.” Omino replied. And with a twinkle in his eye, he turned to make his way back into the night.