I like to think of motherhood as a great big adventure. You set off on a journey, you don’t really know how to navigate things, and you don’t exactly know where you’re going or how you’re going to get there. 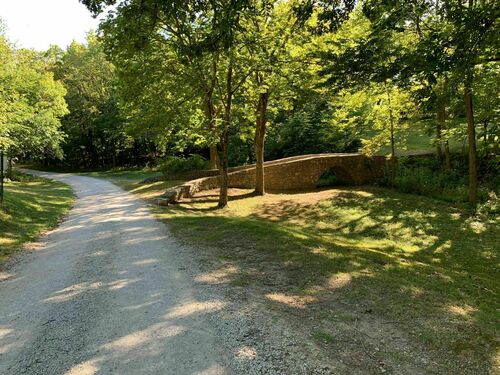 We recently visited Des Moines, IA for my oldest son’s first out-of-town baseball tournament and decided to make it a family trip. Friday and Saturday were hot and fun. The team and families had time to socialize during shared meals and down time. And fueled by their excitement, the boys played two fantastic games. Then, over the wee hours of Sunday morning a thunderstorm swept in and the remainder of the tournament was cancelled. All of the boys hung their heads low while we packed up our cars and headed home early. We were all bummed, especially because it was the last tournament of the season.

Without needing to rush home to settle down for the week ahead, we decided to detour to Winterset City Park for a picnic lunch. We were in Madison County, afterall- how could I pass up the chance to see the inspirational landscape for one of my favorite books?

Entering the park, we drove along the small one-way road, not sure where to go. The woods surrounded us, the air was fresh and cool. It felt like we were driving into a campground or down to the lakeside in the Ozarks. The road kept going, winding and winding,  occasionally coming to a fork where we had to guess which way to go. We didn’t know anything of the places which were indicated so we picked one- Clark’s Tower. And still the road continued winding!

It wasn’t a long time, but it was a beautiful, curious moment that stretched out for maybe ten minutes. What was at the end of this long, winding road? What would Clark’s Tower be? I hadn’t done anything this truly unplanned in a long time, so despite the scale of the adventure, it felt freeing. I hoped my teenage son could set down his disappointment for a little while, too. I rested my hand and chin on the open window frame to feel the breeze on my face and watch the trees. Finally, we turned a corner and up the hill was our stop. 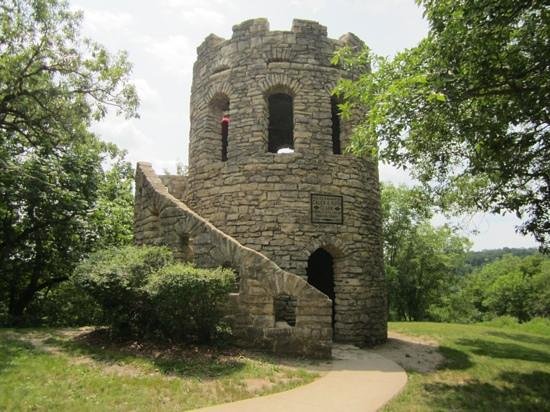 Clark’s Tower was built in 1926 in memory of Caleb and Ruth Clark, 1846 pioneer settlers of Madison County. It looks like a miniature castle tower with an exterior set of steps and an interior ladder to the top. Its walls were thickly constructed, and the lower level would be a cool and shady respite were it a hot day. The top of the tower revealed a nearly panoramic view of the horizon.

Just minutes ago, we had no idea where we were going, with no particular intention in mind. Now, we were level with the treetops, gazing at a gloriously blue sky above rolling hills covered with patches of trees. I grew up with a pioneering spirit and a love of the vast expanse of Midwestern skies. With the little spontaneous adventure that led to this spot and the metaphorical possibility that lay before me, this felt like my childhood (past), present and future held together in one. 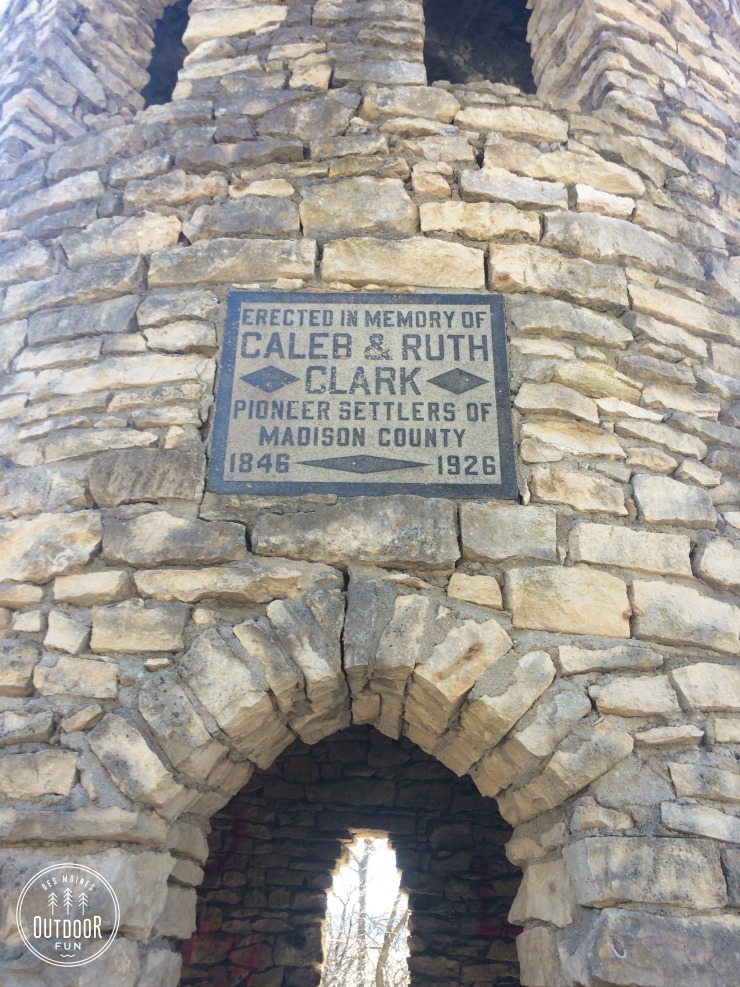 The rest of our lunch stop was equally satisfying. It was also the first in a long time that our family was together, away from home, without concern for time or agenda. We were relaxed and carefree, eating our picnic and ambling about the park amenities. We giggled through the hedge maze, calling to our youngest son who kept losing us. We marveled at the age and construction of the covered bridge, and dawdled about the lawns. Then as the others packed up the car, my youngest discovered a mulberry tree downhill of the playground. He and I stole beneath it for our last quiet moments together, staining our fingertips and mouths with the juice of its ripe, dark berries.

Again, and again, our couple of hours of togetherness danced in and out of time. I was a carefree child. I was a woman marveling at the past. I was a girl dreaming of pioneer skies. I was a mother setting the picnic table for her family, and relishing in tender moments with her children.