I remember the day that the lesson really sank in for me: I was sitting on the couch, and the children in my care were playing all around me.  There were two brothers playing nearby: Charles (age 2) and Jamie (not quite 4 years old).  Jamie had a beanbag and was dropping it on Charles, over and over again.

At first, Charles kind of liked it, but soon I could see that he was getting annoyed by it.  He frowned, then moved away. But Jamie followed him and continued to drop the beanbag onto him, pick it up, and do it again.  Charles pushed at Jamie with one hand, trying to get him to stay away.

I could feel my own annoyance starting to build, and I could hear the words that I wanted to say, echoing in my head: “Jamie, stop it.  He doesn’t like that!”

But then I paused.

I’d been working really hard on helping the boys work things out on their own, and I knew that my knee-jerk response wasn’t what I wanted.  I didn’t want Jamie to stop because I wanted him to; I wanted him to stop because that’s what Charles wanted.  The situation wasn’t really hurtful, just annoying, so I had some time.  What could I do?

First, I thought about pointing out Charles’ reaction (frowning, moving away, putting his hand out) and 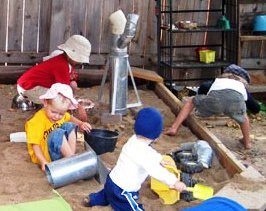 explaining that Charles didn’t like what he was doing.  That seemed better, but quite cumbersome and he’d still be stopping because of me, not because of Charles.  Suddenly, I knew what to say.

“Charles, if you don’t like that, you can say, ‘Please stop,'” I said.  Charles looked at his brother.

“Peez stop,” he said emphatically.  Jamie grinned, picked the beanbag up, and dropped it on him again.  Darn, but at least this time I had something to work with.  Now I could facilitate their discussion instead of issuing a judgment from on high.

“I heard Charles say ‘Please stop,'” I said.  I paused to see what would happen next.  They both paused too.  For a moment, it was like the three of us were frozen, each waiting to see what the other would do; they weren’t sure what came next.  I chuckled inside a little; we had said ‘stop,’ after all.

This was my moment of enlightenment: we don’t really want a person to ‘stop,’ we just want them to do something else, preferably something that isn’t annoying.  “What will you find to do instead?”  I asked him.  He looked relieved, but slightly lost.  I can help with this, too, I thought.  “I know…let’s set up a basket for you to throw the beanbag into.  You could invite Charles to throw one in too.  Where IS a basket?”  The three of us looked around, and Charles ran over to get one.  I handed a second beanbag to Jamie and said in a low voice, “Why don’t you ask Charles if he’d like a beanbag too?”  Charles did, and soon they were happily playing together.  “There,” I said.  “This is a game with beanbags that everyone can enjoy.” 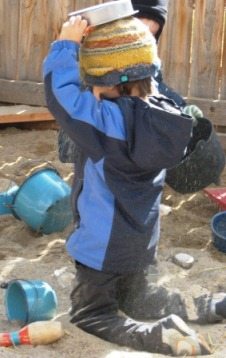 That day was a turning point for me and those two boys.  From then on, I really lived into this new role I had created for myself, as facilitator.  I’d listen with my ‘eagle ear.’  If one boy was squealing (usually Charles), I’d suggest words for him to use.  If one boy was yelling stop and hitting (usually Jamie), I’d say, “Please stop” in a pleasant tone, and he would repeat it, inflection and all.  If either boy said ‘stop,’ with or without my prompting, I’d make sure that the other found something else to do.  Since the boys often bugged each other when they wanted to interact, we’d try and find something that they could do together, but that both could enjoy.  If they couldn’t come up with any ideas, I’d offer suggestions, but I asked them to come up with their own ideas more and more.

About four months later, we were outside.  I was sitting in my Adirondack chair, and the boys were playing in the sandbox.  Other children were playing around the yard.  Charles was making a sand castle, and Jamie drove into it with a truck.  I thought, “Wow.  Some things never change.”  But I didn’t jump up, or jump in, because while some things never change, others do.

Jamie: “Let’s make a sand castle together and run into it with our trucks.”

Jamie: “OK, I’ll make a sand castle to run into” and he went and got another bucket.

I smiled and took a sip of my iced tea.

Faith Collins is the founder of Joyful Toddlers, an online community providing support for parents and caregivers through Tele-Classes, workshops, blogging, and coaching (www.joyfultoddlers.com).  She and her husband split their time between Denver, CO and London, England.

We thank you for stopping by to enjoy this article. If you would like to share your experiences working with children in a LifeWays home or center, please feel free to contact Mara Spiropoulos at spiropoulosm@yahoo.com. She would be thrilled to work with you to share your wisdom and experiences on the LifeWays blog