“No.” He would answer with a definitive shake of his head.

Same shake of the head.

“Is Mama hang gliding in the Swiss Alps?” Or “Kayaking down the Colorado River?” Or “Riding a camel in the Saudi Arabian Desert?” Or “Rock climbing in the Rockies?” Or “Hiking the Appalachian Trail?” Sometimes I had to be quite creative before I would finally get an enthusiastic and resounding, ”Yes!” Mama got to do all sorts of amazing adventures while her son waited patiently at Lifeways for her return and she always got back by closing! Then one day he asked me, “Where’s Mama?” And as children do sometimes, without waiting for my answer, he answered his own question, matter of factly, “Mama’s at work!” That was it. Something had become real and fixed for him. He never asked again.

It is interesting, isn’t it, to be witness to a milestone of that nature?  Will 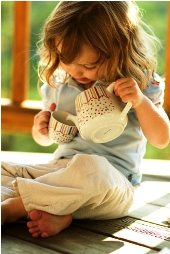 I am in such an amazing place as a caregiver. My own children are suddenly, slowly, subtly, surprisingly becoming friends. When I look at the children in my suite, I see them through a prism of what is before me as well as the future. I can see the forest and the trees at the same time. I know that my twenty three year old son, who was the worst biter in the world, has not bitten anyone in a long, long time. Of course there was that time two weeks ago when they were horsing around in the kitchen and he bit the hair on his seventeen year old brother’s head! My daughter, who would not wipe her own bottom at four, is now nineteen. It has been years since she has asked for a wipe. In the moment, I thought it would never end and that there was a good chance that one of us would not survive the ordeal. I was not sure who.

Now, when one of the children in the suite seems to be going through a phase, and they all seem to be going through something at any given time, I can recognize it for what it is, something that will pass. I also know that when the passing comes, whether I recognize it immediately or realize it three weeks later, “Wow, Samson hasn’t thrown his plate on the floor in three weeks!” I will be flooded instantly with all those thousands of emotions I felt with, “Mama’s at work”—pride, sorrow, love, warmth, excitement, fear- all of it felt in a nanosecond.

The great rhythm of life has moved on.

How good that is to know.

Jane Sustar is a caregiver at LifeWays Milwaukee and teaches with the Wisconsin LifeWays Training program. She is also a busy mother to six.

We thank you for stopping by to enjoy this article. If you would like to share your experiences working with children in a LifeWays home or center, please feel free to contact Mara Spiropoulos at spiropoulosm@yahoo.com. She would be thrilled to work with you to share your wisdom and experiences on the LifeWays blog.

3 thoughts on “Changes in Rhythm, by Jane Sustar”