At Rainbow Bridge, we had twelve children, ranging from one to five years old. Each year, we developed our Michaelmas theme over several weeks starting in late September. We would open our circle with “The Autumn Winds Blow Open the Gate, St. Michael for You We Wait” (see blog entry by Mara Spiropolous on September 6, 2012.)  Then we would sing a shortened version of Elizabeth Lebret’s song “A Knight and a Lady,” with words I changed to be less sexist and to represent taming, rather than slaying, the dragon:

A knight and a lady went riding one day,

Far into the forest, away, away.

A fiery, fierce dragon they spied on the grass,

What should they do? Alas! Alas!

The two tamed the dragon and then they were gay!

They rode on together, away, away.

After the first week of this Michaelmas circle, we would let children act it out while we sang, some years with one 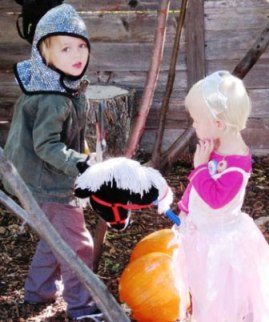 child sitting in costume on the rocking horse, other years with two children as the knight and the lady, riding their stick horses into the other room and back. “Costumes” involved a crown for the lady and a knight’s hood of soft silver cloth and our special sword for the knight. We’d sing the song several times, and the oldest children were eager to go first, but after a while even the two-year-olds wanted to be the knight. One of my all-time favorite images is little Martine on the rocking horse, with her binky in her mouth and the sword in her hand!

Around the third week I’d tell a story—perhaps at the lunch table—about a kingdom that was plagued by a fiery, fierce dragon, and how the king’s daughter wasn’t afraid and volunteered to go out and meet the dragon. But then a knight came into the kingdom…and with St. Michael’s help they tamed the dragon and brought him back, where he went to work for the people, using his fire to warm their homes and cook their food.  Then I’d end it with a puppet show that we did several times with the children, and again for the families at our Fall Festival. 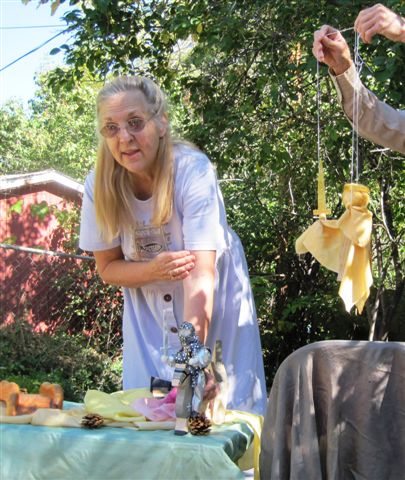 One year we acted out the story at the festival, which was held on a Friday, around the noon pickup time (11:30-12:30) and included hot apple cider, apple and pumpkin pies and “dragon bread” (dough in the shape of a large dragon) that we had baked that week with the children.  We also had a large metal dragon that would hang from the tree, and the theme became reflected in the children’s play, as you can see in the photo of the three knights, one with a pot on his head.

This level of celebration, combined with our own inner awareness of the Michaelmas season, was a strengthening for all of us and had the advantage of occurring the same way—but with some differences—year after year.

Rahima was co-founder of Rainbow Bridge LifeWays Program, serving families in Boulder, Colorado, from 2008-2012. She is author of You are your Child’s First Teacher and serves on the LifeWays board.

2 thoughts on “Celebrating Michaelmas with Toddlers, by Rahima Baldwin Dancy”