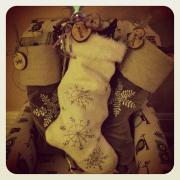 I always find winter to be a time of great reflection. As the world slows down it gives us a moment to sit, and to think; to really find ourselves with a warm cup of tea and gentle snowfall; to embrace the previous year and all of its trials and successes. However, this always happens for me around January, after the holidays, which are a uniquely stressful time for me. As a single mother I always struggle with how to approach them, how to balance them, how to get it all done in time to actually ENJOY them.

I have a huge family. I have a huge step-family, that also has a step-family. I’m not with the father of my daughter, which adds even more family. I’ve also added a boyfriend to the mix. This makes for a very long list of people to see, as well as several holiday celebrations to attend. It also brings different traditions as well as expectations. At a minimum we have eight Christmas parties in my family each year. Up until this year I just accepted that. By the end of the third party my daughter would be cranky, exhausted and falling asleep in my lap, with no desire to open any presents. I’d be lugging around huge boxes of presents and diaper bags and food by myself with a half-asleep crabby child in tow. After four years of this, I knew it just wasn’t working, and it certainly wasn’t helping me keep our focus on traditions over consumerism. But how could I fix it? On top of that, I had no idea how to approach Christmas morning. Do I take her shopping for me? Do we all get stockings? Should I buy myself something to put under the tree so she isn’t the only one opening gifts? It was all so confusing. Every year seemed more challenging. I knew I had to start making some decisions and setting new boundaries with my family in order to give my daughter the Christmas I wanted.

I had mentioned it the year prior, that it was simply too much for a small child and that I didn’t want to go to ALL of the parties. I was met with backlash immediately and attacked verbally about breaking traditions. This wasn’t anything new for me. At the last Christmas party I was criticized for eating organic food from scratch (“Don’t you know they make TV dinners!”) and making my own laundry soap (“How preposterous. Just buy it!”), and let us not forget the worst one, not letting my daughter play on the iPad! I have a feeling some of you can relate. So how exactly was I going to pull this off without creating a huge fight? I needed to figure out a peaceful approach and a way to manage the feelings that were already running high. In order to do that, I had to first analyze why, exactly, they were feeling the anger they showed me. Much like a child that’s acting out because they’re tired or hungry, there’s always a reason people are reacting the way they do. In order to find peace with each other, I think we must strive to understand their intentions. Are they reacting or responding?

When I thought about it, I remembered a few years prior when we had to spoil the Santa tradition. My daughter was so terrified of a man dressed up as Santa one year that I told her the truth. That it was a costume, and a fun game we play during the holidays. I never expected the backlash I received when I told people. I stepped back and listened to everyone debating back and forth about how I had ruined my daughter’s childhood, and how the magic of Christmas was gone. I was shocked. She seemed a lot happier with it being a game than thinking a stranger was breaking into our house at night. I had to resist my own urge to lash back at them in defensiveness. I wanted to understand why they were so angry, when I was obviously doing what was best for my child, not serving my own interests.

Then it dawned on me, isn’t that a big part of what love is? To put the needs of others before ourselves when they need us? I meditated on this thought for some time. Trying to understand the anger and frustration that was happening in my family with the holidays, I put myself in their shoes and realized that they were, in a way, clinging to their own childhoods. They were resisting the changes as though letting go of those tightly-held traditions would make the memories of their own childhood vanish. Perhaps they were longing for a time when things were simpler. Childhood is so sacred to us, and we cling onto warm memories of it so tightly, afraid we might lose ourselves amidst the ever-changing lives we lead.

With that I realized what I had to do. When I talked to my Mother, I addressed her concerns, but calmly explained my own concerns and how I was ready to start creating my own traditions. I told her that I wanted to hold on to the parts that are truly meaningful and sacred, and let go of the stresses associated with it. I was feeling rejected because I had chosen a different path, but I was doing what I felt was best for us. I knew she wanted to show affection to my daughter, but she didn’t need to do that through money or gifts, although they had been appreciated. I offered to host a smaller Christmas, with the focus being on the food and company. There were no unkind words. She understood, and we reflected on it being the moment we passed the torch.