Eleven years ago, on August 1st, 2010, my youngest daughter, Taylor Hodgkin, and I opened our Northern California LifeWays program, BeeLoved Farm, with just 1 student. Today, we have over 60 children enrolled for Fall, 2021, with many waiting. Although our program is essentially the same as it was 11 years ago, we have seen a lot of changes in the families throughout the past decade and those changes were magnified at the onset of last year’s pandemic. “Nothing could have prepared us for what we witnessed in 2020.”

Like everyone else, our school closed on that fateful Friday the 13th in March of 2020. I could not have predicted the fall-out that occurred and, admittedly, I was absolutely behind the curve with regard to the seriousness of the matter. As things began to unfold, I realized how desperate the families were for some sort of lifeline. The families wanted support. We refunded ALL tuitions, I delivered or mailed crafts to every home, sent post cards to each child, posted Youtube videos on how to bake bread and cook our Kindergarten snacks, performed puppet shows via Youtube, sent music files of seasonal circles, emailed stories, hosted parent-support Zoom calls, and several other “distant” deeds to support families. But this was not the kind of support these families needed. What I came to realize was that the best support we could provide the families in our community was to reopen our Center. So, in May of 2020, in the eye of the storm, we reopened our program with a caveat that it would be 100% outdoors.

It was extremely difficult to make this decision given the amount of suffering in the world. The political, economic, and social climate was so very confusing and divisive that, on many levels, reopening BeeLoved Farm did not make sense. But our program has had a sole mission since its inception and that is “to heal”. So, after spending unimaginable hours on the phone and computer researching, zoom-calling, preparing protocols, obtaining permission of State Licensing and County Health Departments, and with all the courage we could muster, we reopened our program in May, 2020. The program filled in 24 hours.

Before opening were two STRONG messages conveyed to the community: 1) please take a proactive and participatory roll your family’s health, and 2) everyone was free to respond however they saw fit for their own family. We had all the proper “health precautions” with regard to cases of anti-bacterial soap dispensers, boxes and boxes of masks & gloves, self-serve temperature-taking stations throughout the campus, electronic (touchless) “check-in/check-out” QR codes were hung so parents need not use pens to sign-in/sign-out their child, gallons of harsh cleaning agent, etc. Ultimately, NONE of the items were used, largely because our program had been moved outdoors and parents/teachers felt safe. I also purchased cases or organic zinc and quinine tinctures for the teachers, which WERE used.

All the classrooms, each having 2 tracks, were completely full. We eventually reinstated the indoor part of our program in August, 2020 with the installation of high-quality purifying machines in each of the classrooms.

We operated all year long without a single day of closure. Not one person in our entire community became ill. Not one of the teachers had so much as a cold (two of our teachers were pregnant). We celebrated every one of our annual Festivals outdoors; however, we canceled our annual Grandparent’s Day in March, wherein we usually open the garden by planting veggie starts and flowers. Our Lantern Walk had over 150 people here, including grandparents, wherein we enjoyed apple crisps and hot cider made from apples that the children harvested. I thought we would certainly be turned-in for having such a large public gathering in November. NEVER before had we seen such a turn-out to our festivals. It was terrifying, but we forged ahead into the unknown all year long with courage by our side. 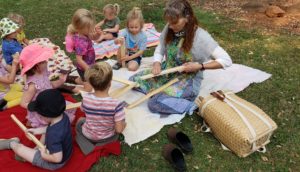 We did not make any changes to our program at all, but were vigilant that no child be allowed in school who was unwell, including a runny nose. Since inception, we have always held our classrooms to about 10 or 11 students per day, per class. We have always been a largely outdoor program. We have always been fastidious about cleaning our rooms. We have always implemented safety surrounding food handling. Thus, we made zero changes other than taking extremely good care of ourselves, including daily natural doses of vitamin D, and remained positive, while encouraging others to do the same.

Nobody will ever be able to explain how such a large community, none of whom wore masks all year, defied all the odds and remained so healthy without so much as a common cold when the rest of the world was in such a state of deep suffering. But there is one thing I can say with certainty, “Nothing Could Have Prepared Us For What We Witnessed in 2020” was absolutely a false statement. A decade of serving families, being committed to the outdoors, keeping our rooms “LifeWays” clean, living a healthy lifestyle, embracing the tenets of LifeWays, taking the virtues of courage and Michaelmas into our hearts, practicing equanimity, making informed decisions (regardless of popularity) and sticking to it, taking ‘the road less traveled’, trying our best to do the right thing at the right time, and keeping in mind that the actions of our deeds, regardless of our well-meaning intentions, will have consequences and serve as the seeds of karma.

Everything we have practiced in the past decade had served as our preparation for 2020.

The training ground for what I thought would be the title of this article, “Nothing Could Have Prepared Us For What We Witnessed in 2020” was indeed running a LifeWays and ultimately a WECAN program for over a decade. LifeWays certainly prepared us well. Our resources for grieving and everything surrounding the healing of that grief was right here within BeeLoved Farm. Our mission remains, “to heal” and that mission was certainly taken to task and reinforced in 2020. I have Cynthia Aldinger to thank for having led us to this point in BeeLoved Farm’s history, wherein we had 101 students on our waiting list this year! Cynthia taught us well and thus the community of BeeLoved Farm thrived.

Kelly and Taylor Hodgkin enrolled in the LifeWays Program in Austin, TX in July, 2010 and the following month, on August 1st, 2010, returned to Shingle Springs to open BeeLoved Farm. After just one year we had a waiting-list and the program began to expand. We have been careful to remain true to the tenets of LifeWays and WECAN. In 2014 Shayne Hodgkin, and in 2018 Kelly Hodgkin, and in 2021 Taylor Hodgkin (pending) graduated from our respective Waldorf Early Childhood Teacher Training Programs. We are thrilled to include a seasoned veteran, Martie Fine, to our faculty next Fall.

A special Thank you to Bill Hodgkin, husband to Kelly and father to Taylor and Shayne (and their bother, Colt), for all that he has done to help create the “bones” of BeeLoved Farm’s physical space. Without Bill, BeeLoved Farm would still be a dream instead of a reality.