The sense of touch beholds a beautiful paradox. Through it we come to an awareness that we are separate from the world, from the cosmos that surrounds us; yet, as we experience it, we also follow a deep longing to reconnect with it. The more intimately we connect through touch, the more we realize how very separate, how very distant we actually are. 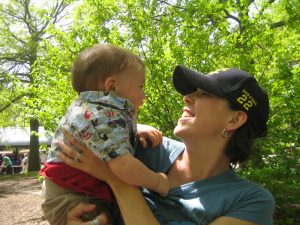 An example that best explains this for me is a feeling I have towards my sons when they are very young. It’s a love and devotion that is also a sad yearning that makes me want to eat them up so I can have them back inside me. Touching them- holding, rocking, caressing, kissing- not any of it seems to be enough because I know deeply that they are not of me anymore.

In his book Our Twelve Senses, Albert Soesman explains that it is through our sense of touch that we first develop an awareness of such boundaries. We awaken to that which is not us. This remarkable learning process of self-discovery, as he says, takes years. An infant touches all that is around her hundreds, if not thousands, of times before she becomes aware that her surroundings are not her. What drives her to continue this self-discovery is her will, and her will continues to predominate her mode of development until the age of seven. Her will allows her to experience the sense of touch, among other senses, to learn about herself. She does not know consciously that she is separate from this world, but her consciousness grows as she is learning all that is not her.

As care providers and parents, we can honor this process by paying close attention to what and how our children interact with the world. As an infant, my youngest son spent a lot of time outdoors and freely moving around on the floor. He was able to constantly interact with natural toys, household objects and nature. He was able to push against his environment over and over again to discover those boundaries of what was “him” and what was “not him.” And he was often close to me, in the carrier or in my lap, when he wasn’t moving freely. I rocked him, caressed him, and played lap games with him. 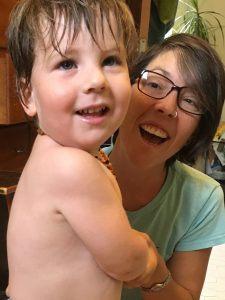 We cared gently for his body together. As he grew into a toddler and he wanted to help with all I did, I incorporated him into my activities, giving him more to touch and to engage with his will.

Now he is over 3 ½ years old and in the middle of a rather turbulent stage where the will really seems to intensify. Developmentally, this makes sense. He has been upright and walking for over two years, his balance is increasing, and his movements are more fluid. Settling down from an exponential accumulation of vocabulary and sharpening of articulate speech, he speaks quite fluently within conversation. He independently cares for most of his basic needs. He is deeply immersed in his imagination, spending most of the day in some fantasy game or another. The sense of touch, along with the other foundational senses, has given him a lot of mastery over his physical body in these short 3 ½ years.

Currently, he is involved in the experience of discovering a form of boundary that is not so tangible- when his will meets mine. He has encountered this boundary for a while now, for it is not that we wait until a child is 3 or 3 ½ to first say, “You may do this, you may not do that.” But, at this age- and for some children much sooner- he has encountered this boundary often enough to come upon a new-found awareness of how he can engage and resist it. Combine this with the intense emotions that come with meeting the will of another person, and things can get very messy!

Take this situation for example: In the mornings as our friends arrive to school, the children play freely and then move into a kindergarten activity or craft. Recently, he has put up a very loud and fierce resistance to this transition. My goal is to move him through this transition as smoothly as possible, as he is learning the larger lesson of when and how to apply his will appropriately, and I can use the sense of touch to do this.

Soesman explains that aside from using touch to experience what is there and where we are, we also use it to express intimacy. Naturally, we are drawn to that which we are related, as we are not totally closed off from the cosmos within which we live. He gives an example of when a mother or father takes their child upon the lap and plays a little tickle game. Through these games, the child is reminded of his separateness but also “touching upon” that longing to be in union with the cosmos- and us- again. This is exactly how I switch gears with my son.

Scooped up into my lap, we play games for a few minutes and suddenly his focus is on us and the tension has been released. I tell him what we are doing for craft and carry him with me to collect the remainder of the supplies. In his anticipation of the activity, it becomes much easier to join me in tidying and sitting to table. In the following days, I catch him in a moment when his play has naturally lagged, before the usual moment of transition, and repeat the process until it no longer becomes an area of challenge.

Sometimes, these plans don’t move along so swimmingly and the separation must be solidified by a real removal from the situation and myself. He’s not welcome to return until he is choosing to stop his fight, calm down with me and join our activity willingly. The reiteration of separation, coupled with his devotion to be together, seems to overpower his will to resist for too long.

As I work with young children, I strive to maintain a dreaminess about them, focusing upon what we are doing as opposed to what they feel or think (which they will be developing later on in childhood). This very young stage, younger than the age of seven, is about doing- or willing. 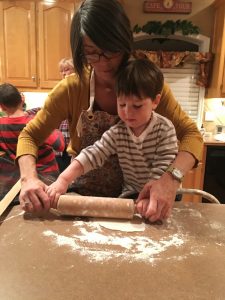 Children developing their bodies, and all the forces of growth should be maintained there as much as possible. However, as the children move through this first seven-year phase, one can see how they become ready to move into the next phase. Five and six year olds, for example, become more interested in their ideas and how to will their ideas into reality. They can be more likely to decide what they feel or think about something, becoming fixated on it even.

I have a five year old in my care at Rose Rock who is sweet, bright and intense. Moving from one extreme to another, his will has led the way through the better part of his childhood with few rules and boundaries at home. He has strong feelings and opinions about what he wants to do and especially what he does not want to do. I have spent the last eight months helping his family to create boundaries and consequences that guide his will in a productive and positive direction, and I cannot help but notice how the sense of touch relates to these less tangible boundaries. In a way, they are much like the sense of touch working on a higher plane–in breaking set rules, there comes a separation, even isolation, and a desire to reconnect. A child of five is just beginning to understand such cause and effect, but I can see it beginning.

Upon entering the school year, he often struggled with feeling a sense of belonging with his peers. He would exclaim that he was being left out, when in fact, there had been great effort made to include him until he overstepped someone else’s boundaries. In breaking the boundaries of the social rules and then coming back up against them in his desire to be friends again, this five year old has begun developing an awareness of his own actions.

Shifting his focus away from his feelings and opinions has been more of a challenge. He often resists joining me in physical work when he is having a hard day. I encourage him by pointing out the special tasks he has as one of the oldest in class, or placing the focus on what we are doing together without mention of why he is helping at all. Sometimes I just have to say, “We’re doing this now.” and firmly hold the intention. Physical work through the sense of touch engages his will in a more productive way and redirects his growth forces into his body, where they belong right now. If his feelings are particularly intense it can be intense work to match, such as hauling sticks and logs in a wagon outdoors, or picking up chairs and wiping the floor indoors.

As I spend a lot of time having to patiently hold firm boundaries for him throughout our days, I often take moments to reconnect with him intimately as well. Sometimes I scoop him up to play with him for a moment, or just lovingly cup his cheek with my hand. When we come inside to prepare for lunch, I wipe the children’s hands and faces with lavender water then brush their hair and often I pull him up in my lap to brush his. If he has been hurtful with friends, I give him the chance to gently brush someone else’s hair. Through these intimate moments, I maintain a close bond with him as he freshly experiences separateness from the world through his encounters with strong boundaries and consequences.

With the sense of touch, we first encounter boundaries. An infant, coming in contact with all her surroundings gradually discovers what is of her, and what is not- a boundary of body. Through her will and the use of touch, she quickly builds a skill set that allows her to interact with her surroundings. As her care provider, I give her ample time to discover freely and safely, while bonding with her through lots of loving or playful touch. Then as a toddler, she grows in awareness when, upright, she begins to walk around and imitate the work and play of others. Here I support her with meaningful work to imitate and more to experience with the sense of touch in her doing. Gradually, she discovers the boundary of will, when her will encounters the will of others. I support her by redirecting her will into productive channels, again through her body’s work, and continue to connect with her tenderly through nurturing and playful touch. Through all of these stages of development in young childhood, the sense of touch is a beautiful tool for guidance and connection.

Currently, Acacia shares the school house with her husband and three sons as Rose Rock’s Faculty-in-Residence. She strives to help bring Rose Rock’s children the very components of LifeWays that originally inspired the journey to her chosen vocation. In 2016, Acacia completed the LifeWays Early Childhood Certification in Austin, Texas.