Last year, at the end of October, I went on a camping trip with my husband of 11 years, my 10-year-old daughter, and my 4 year-old-son. My husband and I reveled in the preparations for our weekend adventure—from updating our camping list to setting up camp by the light of our headlamps. Even as we scurried about in semi-darkness, working to pitch the tent and unpack our gear, we were so happy to be completely enveloped in the outdoors—just the four of us.

When we awoke the first morning, we built our fire and made a delicious breakfast. After tidying camp, we checked some maps for hiking trails.  Then, we happily hit the trail of our choice. We walked together for miles and miles, enjoying each other’s company, but often walking in the bliss of quiet. Once we arrived back at camp, I napped with my son, while my husband and daughter went in search of dry firewood. After napping and gathering wood, we all worked together to prepare dinner and make skewers for roasting marshmallows. 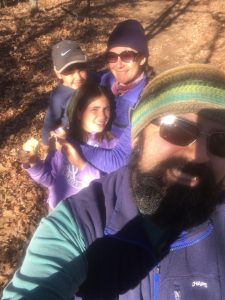 As we were cooperating in our little camp, I experienced a strong  image of  an alternate reality where this camping trip was my family’s final outing together. At this camping trip, my husband and I would admit that we would never fully love each other again; instead, we would both agree it was time to separate. This detailed picture and story appeared to me in a matter of seconds, and I was looking at my husband as he was speaking to me, when this happened.

This experience was particularly meaningful to me because, two years ago, I had come to an all-time low in my marriage. Before I explain why my marriage crumbled, I wish to give you an idea of why I had the fortitude to rebuild it. When I first met my husband, I was instantly intrigued. I was not head over heels in love, as he was; though, I found him thrilling, for sure. He was artistic, funny, and smart. The first thing that I think I truly loved about him was how much everyone loved him. I had never met anyone whom everyone resolutely agreed was worthy of adoration and respect. This beloved human is the person that I married.

However, nine years into our marriage, I discovered that my husband had been dishonest with me for our entire marriage. The untruths he constructed over the previous decade had become too big for him to conceal any longer, and he was forced to come clean. His deceit revolved completely around how he was “managing” our finances. I learned that our family was in a perilous financial situation. Finding out that someone I was positive I could always trust had actually always been lying to me was a very bitter pill to swallow, and I was bitter. At that time, I felt as if I had lost every ounce of love and respect for him.

It seemed easier and less painful to leave the marriage.  I didn’t know if I would ever find my way back to loving my husband, and I told him plainly that he would have to work to earn my love and trust. I also told him I was only staying for the sake of our children. I told him that what he did was undeniably selfish and unfair to all of us. I told and told and told him until I basically became tired of hearing myself speak about it anymore. The feelings of anger and betrayal were so strong that I almost felt lost in them. Though, while feelings can seem permanent, they are actually quite transient; they can change without us even noticing. The feelings shifted as my husband and I moved through our life–with purpose.

We got to work putting our life back together. We concentrated on making sure our children were being mindfully tended and lovingly held. I set up reparatory parameters for my husband—like him regularly seeing a counselor. I also worked toward repairing my own wounds. I found Forgiving, by Georg Kühlewind, to be the most helpful text. It is a very concise and eloquent guide toward personal reflection and positive action in regard to forgiveness.  An unloving marriage sounded like a misery, so I needed to earnestly attempt to love my husband again, if our family was going to stay together. During this time, my husband was busy with supplying me with all of the paperwork that he had kept hidden for the past decade. This was also a time in which he fully admitted the mistakes that he had made, so that he would avoid making them again in the future. I also admitted that there were behaviors that I could change that would foster more transparency between us. Fast forward through two years and a lot of work, and I do love him again, very much so.

Just as the image on the camping trip had presented, our relationship could have failed this test. If I had let my heart harden, if my husband hadn’t had the willpower to admit and change his behavior, then we could have become mired in lies and anger. I think the redeeming element that enabled us to weather that storm was our faith in each other’s goodness. My husband had to believe that I was good enough to hear him, to believe him, and to eventually trust him again. At the same time, I had to hold tenaciously to the possibility that he could be good enough to be honest, that he could conquer old habits, that his virtues could overcome his vices.

The truth is that my husband and I both love each other more deeply now than ever, which is a gift that I did not expect out of such a wretched experience.  We are planning a camping trip for the start of spring. We are eager to once again surround ourselves in nature—a place where beauty and balance are readily observable. In the forest, a fallen tree covered by fungus looks perfect, though in our yard it may look like a mess needing to be removed. Nature understands better than us the gifts that can emerge from dark places. Even after the richness of our experience, I still have the tendency to want to push away what seems imperfect—to immediately fix what is broken. Yet, on a deeper level, I know the truth: There is value in letting decay run its course, so that new life can be properly nourished. 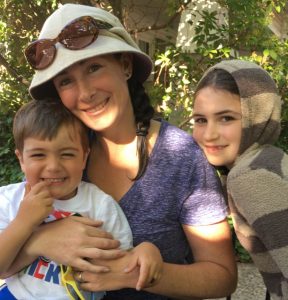 Shanah Ahmadi is a caregiver and administrator at Rose Rock School—a LifeWays Representative Site—in Norman, OK. She has been studying Anthroposophy since she began her journey in childcare and human development 15 years ago. Shanah most enjoys spending time outdoors—gardening, hiking, and camping—with her two children and her husband.