Butterflies have always held their magic for me.  In the spring I planted many butterfly and hummingbird flowers and dreamed of raising butterflies, but never really had time to organize it.  My Butterfly story began unintentionally when one of the neighbors put an old fish tank out on the curb for the taking. I was excited to get the tank because I had been looking for one.   The neighbors were moving and said I could transplant any plants I wanted to my yard!  I made a new garden in the front yard with many of the plants from my neighbor, but after a few days, some of the plants were not happy, (mid-summer transplanting is not recommended) so I went to clip some of the leaves and stems that were turning brown, and low and behold, there was a Monarch caterpillar on the butterfly weed (Asclepia incarnata) plant…just a tiny one!  I clipped the stem and leaves it was on and brought out the fish tank and hung an old gauze curtain over the top. My journey with Butterflies had begun.  I got in touch with a friend who lives in Brooklyn (yes, city) because I had been admiring her online posts about her Monarch Mama experiences and she gave me some good tips on what to do next.  With my new information, I went into the back yard, where I had planted a few milkweed plants and studied them and picked some leaves for the little critter since his plant was on its last leg.  While examining the plant, I found several eggs on the leaves, so I brought those in.  I was getting very excited!  Then I went on a walk to a park that I knew had milkweed and found several “cats” of different sizes and brought them home to the fish tank!  I was hooked!  I hadn’t spent any money, only did a little reading and research, and bingo, I was a Monarch Mama!

As most people know, the Monarchs are in decline and have been for a while.  There is a slow up-swing in numbers now, which is a good thing.  The mosquito spraying in many areas kills far too many of these beauties.  There are several online sites and blogs that cater to raising these wonderful insects in support of helping the survival of the species!  You can use household containers to collect them in, flower vases to hold the Milkweed plants, paper towels for easy cage cleaning (they poop a lot). You also must have a good source for Milkweed!  So, check your neighborhood and your favorite parks!  You can collect eggs on plants in the wild (free!), and some caterpillars too.  You can also buy eggs online…and probably milkweed plants.  Raising these magnificent insects doesn’t take a lot of expertise, or expensive equipment (although you CAN spend quite a bit on it if you want…).  Its fun to read about the stages of development, understand what can go wrong (a few of my wild caught “cats” were infested with tachinid fly maggots…those pesky flies lay their eggs in them…ewww), but raising them from eggs is so much fun!  The magic never stops.  They shed their skin 4 times!  They grow from smaller than a grain of rice to the size of a pea pod!  And you don’t have to do much except keep the milkweed (they ONLY eat milkweed) coming…and mist them with water now and again and keep the flies off them in a secure enclosure!  Easy-peasy!  I encourage anyone interested to do this and help the Monarch population grow.  Birds and pests and pesticides kill far too many, so these insects are struggling to thrive.  In our protected homes and enclosures, they can grow into magnificent winged beings that we release once they have “eclosed”!

Here are some pictures of my process.

That same neighbor where I got the tank and plants, also gave us some odds and ends of wood, so building my enclosure was free too, except for the screening that I used.  I also bought a net cage from Monarch Butterfly Life and some stands and tubes.  I now have a nursery where I keep the eggs safe from hungry bigger cats, a “preschool” where the newly hatched can grow for a week or so indoors, and then the bigger enclosure outside that I built for the big cats to eat their fill and then form the chrysalis.

I took the gauze off for the photo. I have water tubes so the leaves get some water and don’t dry out.  I got these tubes from the Butterfly place, but any floral store can sell you floral tubes.  You could put them in a small jar to support them to stand, or lay them down if they don’t leak the water out.

Those are the eggs!  Small as the head of a pin! Usually only one on a leaf, sometimes two.  They look like a tiny white crystal (three dimensional) on the underside of the leaf, and sometimes on the top of the leaf.

This net cage is called a “cube”, and I got a big one, before I made the one outside…so it’s a bit big (24x24x24) for these little guys, but it works for now.   (If we were to get really scary weather, I could move my big cats indoors if I had to.)     You could keep them all together (mixed age group) but you have to make sure the bigger ones don’t accidentally eat the eggs and tiny ones, so I prefer to keep them separate.

Its totally encased in screen to keep the flies and ants out.  I put in two shelves for the vases.  When you put the Milkweed in a vase, you need to block the water access so none of the cats fall into the water.

And here are some chrysalises that have formed.

Now I wait a week or 10 days for the magic to happen!  The chrysalis you see hanging from the leaf, was the little guy I first found!

You can keep it really simple, or you can go wild with equipment and raise lots of butterflies.  I read that someone released 450 in one summer!  I won’t come close to that, but even if I released a dozen this year, that would be great.  I got a late start (August), so next summer I will get started sooner!  You can only do this during the summer months.  In warmer climates a bit longer I’m sure.  I started a few weeks ago and now have three chrysalis, 4 bigger cats outside, 6 in preschool and 9 eggs developing.

Fingers crossed I don’t get anymore parasites from flies! 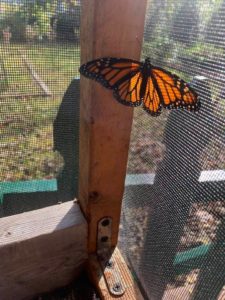 Note from Cynthia: When Simone wrote this article in the autumn, none of the butterflies had yet emerged, so I am happy to share  that all 23 survived and were released over a few weeks.  Here is a photo of the final one freshly emerged and ready to fly in October!  Simone simply reaches into the nursery until the butterfly willingly climbs onto her finger.  Then she brings it outside for the release.  I’m so happy we are sharing this article now so that some of you can get an early start on preparing your own Monarch nursery!