Congratulations to the first four students who graduated from the LifeWays Training held in Seoul, Korea, under the Direction of Young Sook Kim. 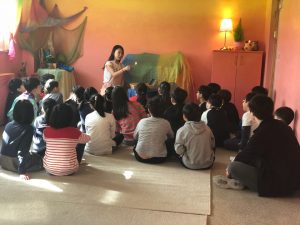 We were also excited to learn that Young and the group have been given the opportunity to open a “LifeWays Living Arts Library” in a school with over 1100 students in Seoul, so we will keep you updated as it unfolds! For those who don’t know, Rahima’s book, You Are Your Child’s First Teacher, has been available in Korean for many years and Young’s book, Grow Slowly, Grow Well, was published in Seoul in 2016.

Six of the students came to Boulder at the end of January for the final week of their training. In the mornings all the students were able to observe kindergarten, preschool and childcare programs at local Waldorf Schools (Boulder Valley and Shining Mountain), Boulder Waldorf Kindergarten and StarSong LifeWays Childcare.  And in the afternoons Cynthia and Rahima taught topics from the LifeWays training.

All of the visitors understood English well enough that translation wasn’t necessary, and discussion took place in both languages with translation. Questions of particular concern were how to convince parents of the value of The Living Arts when many of the parents (and children!) are wanting early academics. 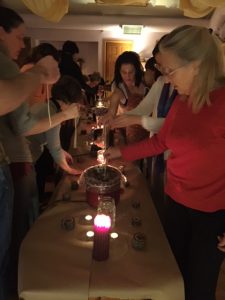 A highlight of the week was the Festival evening shared with the students of the Boulder Training, who were in class the same week and hosted a winter festival at Boulder Waldorf  Kindergarten with a puppet show and dipping beeswax candles. The Korean students shared a movement game in Korean, and everyone enjoyed sharing a hearty soup and homemade bread.

Congratulations again and best wishes in spreading the work in Korea!