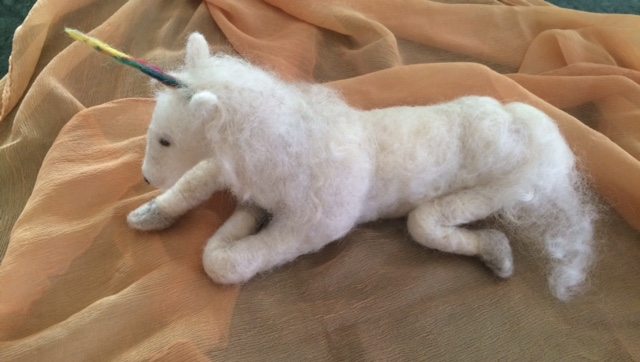 Once there was a lush green valley that was home to many unicorns and other creatures, where everyone was friendly to each other.  The valley was ringed on every side by some of the tallest blue mountains on earth, and every one of those mountains was capped with sparkling white snow all year long.  The valley’s unicorns and all their friends were so glad to live in this beautiful place, for here they had everything that they needed to enjoy their lives.

All the animal families in the valley lived a very good life.  Every family had a cozy nest somewhere.  At the base of the mountains and at the edge of the green valley there were many mountain caves.  The unicorn families each found their own mountain cave for sleeping in and keeping safe.  The unicorns’ caves were dry and cozy, and they were even warm as long as the unicorns were sleeping together there.

One family of unicorns in the valley had a little baby girl, and she was the tiniest unicorn that had ever been born in the valley.  She was little, but she was also ready to grow!  And she loved the life that she had with her Mama and Papa.

One morning, the little unicorn baby’s Mama and Papa awoke as Father Sun’s rays streamed through the doorway of their cave.  They nuzzled their baby awake.  She opened her eyes and looked into their eyes and smiled a big baby unicorn smile and then she snorted for joy!  She saw the sunshine streaming in and she was up on all four of her legs and ready to go!

They all went out to munch on the sweet long grass that grew in the valley.  They didn’t have far to go, for the sweetest grasses grew just a short distance from their cave.  After they had eaten the sweet grass (and also some delicious flowers) for their breakfast, they went to the banks of a bubbling stream that curved right through the valley.  They all three lowered their mouths into the stream for a cool refreshing drink.  Now they were ready to wander!

While they were out in the valley playing and visiting their friends, dark clouds began to gather in the sky, blowing fast into the valley from over the tops of the snow-capped mountains.  The animals in this valley had seen some big storms before, and this one looked especially big.  So all the unicorns and their animal friends went galloping or scampering back to their homes and nests.  The little unicorn girl’s parents stopped quickly to gather some grasses, just in case this storm might be especially long. Then they all three dashed into their cave.

Lightning cracked loudly over the tops of the mountains and rain began to pound the valley floor.  Winds blew fiercely and trees fell over!  It was the worst storm the valley had ever seen.   It continued day after day, with no end in sight!

The little unicorn girl didn’t like having to stay in the cave for so many days.  On the fourth day of storms, when the lightning and thunder kept striking and the rain kept pouring, she slipped out of the cave when her Mama and Papa were not looking.  She wanted to see the storm close-up!  She meant to slip out and slip back very quickly.

But the storm was blowing so much that it blew her far from her cave home doorway!  A strong gust of wind knocked her through the air so far and so hard that she landed with a bump upside down!  She found herself right on the edge of a rushing river of rainwater that was pouring down the mountain and gushing across the valley!  She saw that the river was VERY big, so big that it could easily carry her away.  One more gust of wind and she might go right into that river, right now!

Then the little unicorn girl instantly gathered her strength.  She was NOT going to be carried away by a stormy river!  She jumped up on her four little legs–her legs were little but they were sturdy!  She felt under her for the solid rock floor and planted her feet securely.  Then she didn’t know why, but she poked her horn into the river of water right in front of her and found herself saying, very loudly to the river, “BE STILL!!”

Suddenly there was a beautiful double rainbow rushing upward and outward, starting from the place where the little unicorn girl’s horn had touched the water.  The winds all over the valley began to die down, the rain turned to a fine mist, and in a few more minutes the dark clouds over the whole valley began to fly up over the mountain peaks and to disappear.  Father Sun was able to shine his warm golden rays into the valley again!  And the double rainbow continued to shine for many, many minutes, arching across the valley, radiating its beautiful golden light everywhere.

The little unicorn girl looked at her horn and saw that even her horn was swirling with rainbow light!

All the unicorns and their animal friends came out of their mountain caves when they heard the winds die down and saw the sun shining again.  They were so surprised to see a double rainbow stretching across the whole valley.  Everyone began to sing, they were so delighted with what they saw, and so glad for the storm to end!  The valley was filled with song.

The little unicorn girl ran quickly back to her family’s cave, and her Mama and Papa were happy to see her!  They thought that the storm had swept her out of their cave, so they were relieved that she was safe.  They noticed that her horn was now a most beautiful rainbow color.

That night the little unicorn girl slept very deeply, and during the night she had a dream.  In her dream she saw an angel flying softly into the cave where she slept with her Mama and Papa.  The dream image seemed so real that she opened her eyes to see if there was really an angel there with her, and she was surprised to see that there was!  A beautiful golden angel filled with light was hovering right next to her, and then she landed right next to her bed!  The angel spoke very softly as though what she had to say was only for the little unicorn girl’s ears.

“Today you discovered something important about why you are in this world.  You saw the power in your horn.  It is a power to bring peace and love even in the midst of the wildest storm.  I am here to tell you that one day far in the distance, when you are no longer a child, you will go out into the world as a peacemaker.  You are here to help others, and especially to help human families. The magic of your rainbow horn will bring rainbows into the hearts of those you serve.  I honor you and will always watch over you.  What I have to tell you today is: practice your gifts while you are a child, so that you may more ably fulfill your task when that day comes.”

And with that the angel kissed the little unicorn girl gently on her head and flew quietly and softly out of the cave.

And so the little unicorn girl did as the angel said, she practiced using the magic of her rainbow horn whenever she saw that it was needed.  She helped everywhere in the lush green valley, and she brought many rainbows to her friends and neighbors in their times of trouble.

Then, just as the angel had promised, after her sixteenth birthday she was called into the world beyond the lush green valley where she lived.  She was called to bring peace and love into human hearts, into human families.  She served many families with joy and love and, if I am not mistaken, that is what she is doing even still.

Cindy Brooks is a Marriage and Family Therapist who combines the insights of Rudolf Steiner, psychologists and neuroscientists in her practice.  She consults with parents in any part of California, in person or by phone, and is co-author of Discovering Joy in Parenting, with Joya Birns. See www.inspiredfamilylife.com.