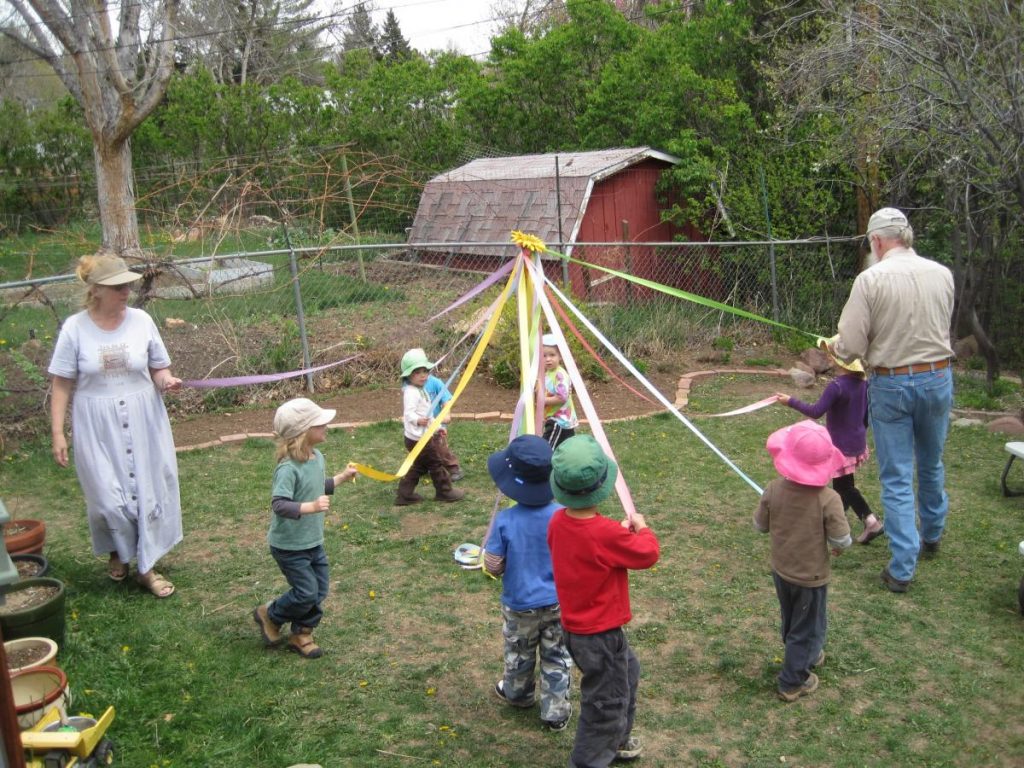 Parents are looking for opportunities to connect with one another, so at Rainbow Bridge LifeWays Program we strengthened community through an alternating series of parent evenings and simple festival gatherings at noon. The noon gatherings preceded pickup for half-day children and were during lunch break for working parents–so we always had a pot of soup for parents, as well as our seasonal “treat” that the children had baked. Depending on the family, some children who stayed full-day went home early, as it can be difficult to have a parent come and then leave again. We also found we could close early with a festival before a major vacation if we gave parents enough warning. The parent evenings covered a topic as well as what we were doing in Rainbow Bridge and left plenty of time for questions and discussion. By spring, our parents had formed their own “mom’s night out group” that met periodically at a restaurant.

Here is a sample schedule that seemed to work well:
September: Introductory Parent Evening with lots of time for Q&A and socializing. Topic was an introduction to LifeWays, especially something related to how we use life as the curriculum (it can be useful to show the LifeWays video by plugging your computer into your television with an HDMI cable.
End of September: Michaelmas. We would have a short outdoor festival at noon with a puppet play, hot cider and dragon bread.
October-November: Parent Evening on warmth, emphasizing why adequate clothing is important as winter approaches
Thanksgiving: Inviting parents to join us for soup and apple and pumpkin pies that the children had helped bake.
December: On the last day before winter break we would have an indoor gathering with soup for parents, a puppet show (such as “The Snow Maiden” or “The Elves and the Shoemaker”) and sing Christmas and Hanukkah songs–so many children don’t have this experience anywhere else!
Late January or February: Parent evening on “Rhythm and Discipline.”
March or April (depending on when spring break occurs): Parent evening using the LifeWays book “Words for Parents in Small Doses” by Judy Frizlen.
May: Spring Festival at noon with our maypole.
June: Family picnic.

Rahima is a founding board member of LifeWays North America and works closely with our training team members to promote LifeWays Trainings throughout the country.  She has been involved with Waldorf education since 1980 as an early childhood and parent educator and author of You Are Your Child’s First Teacher, which has been translated into seven languages.  She and her husband, Agaf, live in Boulder, Colorado and have raised four children.  Semi-retired now, they are delighted grandparents and happy to continue to support the LifeWays work.