“For me, the fact of being a human being…working with Nature with consideration and respect has been a means to offer today’s children an experience of forces that are far beyond our understanding, but that ask for our wondering. To be able to see and wonder is a driving force for health and well being.“ Helle Heckman, Founder of Nokken, A Children’s Garden in Denmark 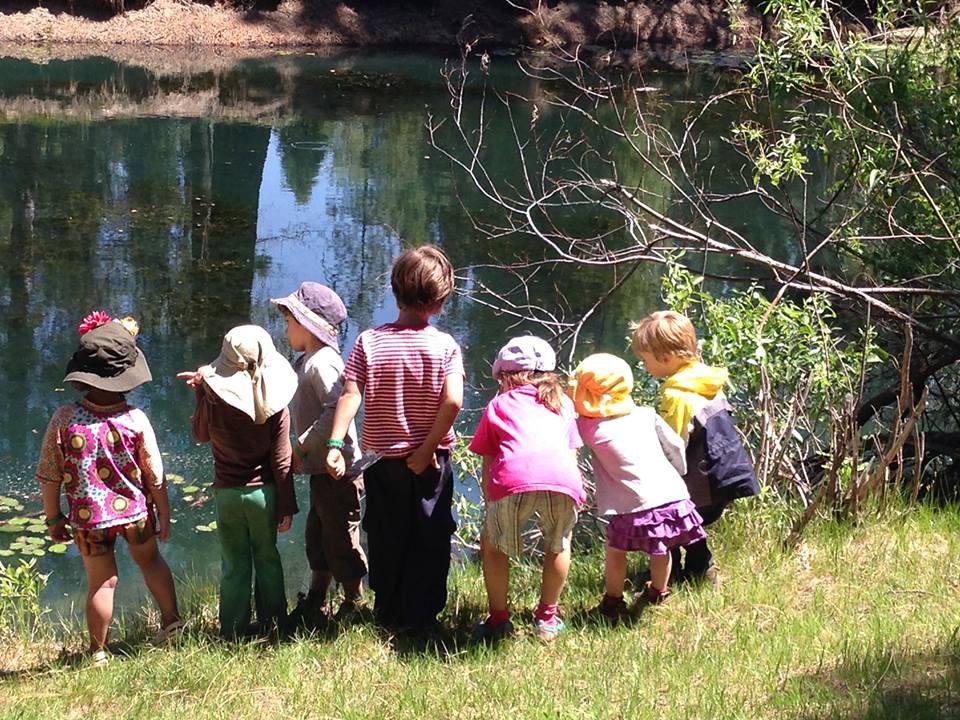 We celebrated our first week of Summer in a local creek-side park with our group of nine children, ages 3 to 6 years. We set out on adventures each day, finding our rhythm and sense of connection among all the expanse of the nature preserve and park. Later in the day we would go exploring along the quiet nature paths to connect again with each other, among all the activity and people that gather there. This was a testimony to the power of rhythm with young children, for there is a hidden art of learning to contract and relax in the openness of summer.

We met in a central picnic area where we put our child-sized backpacks down and geared up with hats and sunscreen. We accompanied them to the newly built bathrooms and organized our things in the picnic area, setting out all of their water canteens to encourage drinking plenty of water on these hot summer days. After setting things up we explored water coloring and nature collage craft under a tree during creative play. Then we came together to the sound of our snack blessing and enjoyed delicious oat bars, homemade cornbread muffins, applesauce and organic grapes; the children peeled their own tangerines and helped to clean up. Now we were ready to set out on our adventures. 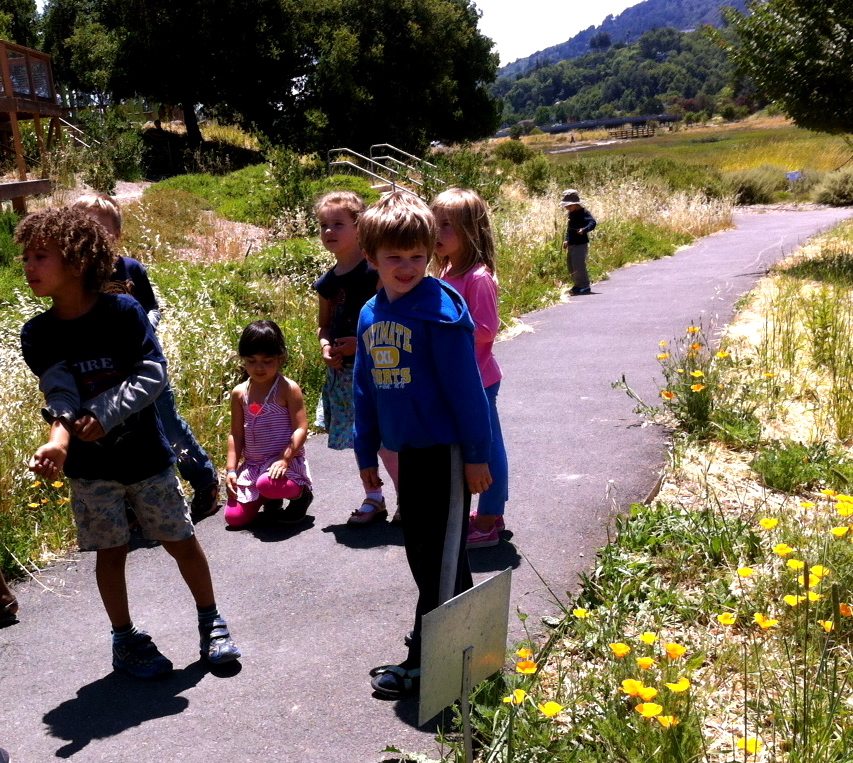 The older children were surprisingly adept and enthusiastic at bicycling in the park, finding different levels of challenge on pathways lined with trees, gentle sloping hills and circular paths, weaving their way, to and fro. Later we spent time sliding down inside the huge spiral slide, exploring the red rope pyramid climbing structure, tumbling on the grass, doing summersaults, stretching, jumping rope and flying our kites!

Children took turns holding the kite up for a friend and counting to three as they ran into the wind, cheering each other on as the kites rose into the sky, or helping each other if they collapsed back to earth. There was a sense of awe when one boy’s kite hovered above the tallest redwood tress. I noticed some of the older girls were spontaneously braiding each other’s hair as they settled on a rock. There was a bonding among the children that was distinct from our days of play during the year, as if they could relax into the openness of just being together there on a rock in the park. 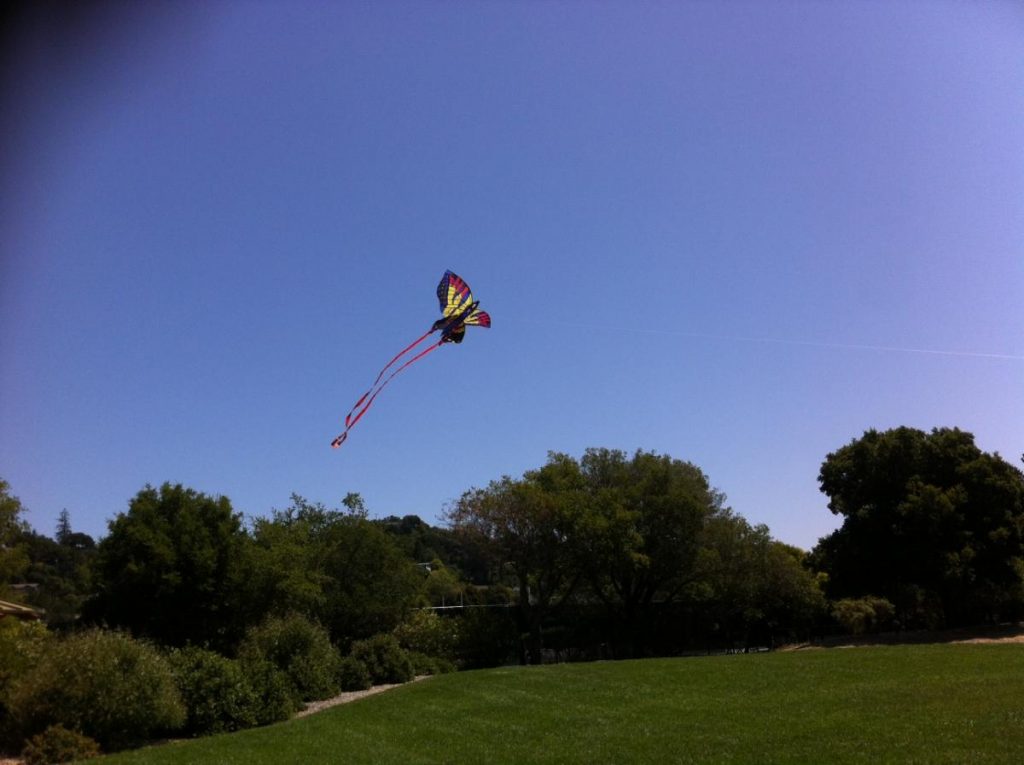 On our nature walks, we started out with silence to encourage the children to open their eyes and ears for seeing and hearing, exploring the colors and sounds of nature all around us. We found poppies, pickle weed, wild flowers, wild radish, tall grasses and salt on the muddy path. We encountered a blue dragonfly, the Blue Darner, a hummingbird, a lizard, a large bird, called a kite, hovering over the marshlands and ducks in the creek. We slid down a tall, steep hill on our bottoms, climbed trees, ate fennel, and discovered a ladybug with six black spots. We stayed along the pathways, out of respect for the marshes and to avoid poison oak and ticks! This was a good way for the children to have the freedom to explore while still being held in our awareness. We could feel the invisible threads of connection stretching out throughout the park spaces between us.

As we ended our walks each day, we began whispered conversations in clustered groups, holding hands in twos and threes and fours. One child invented a poisonous hemlock story to keep us all in suspense as we arrived back at the picnic area. Another child passed out little sprigs of fennel as treats. This experience at the creek-side park really inspired us. It opened us to another level of wonder, sense of connection, and place in our natural world and our local habitat.

Some of the children gathered things to make a “Fairy House” in a forest near the edge of the marsh, building a shelter for the roly-poly bugs with bits of shell, wild grasses, leaves, bark and sticks that they eagerly gathered from the grounds around the marshes. The smell of sage and wild grasses wafted in the dry air as we played along the edges of the swamp. There was an invisible sense of how the water, other elements, bugs, birds and all the critters were all working together in ways that have a healing effect on our senses.

As we wandered along the marshland pathways, I experienced a fresh, natural awareness that I have not felt in a long time.  Young children live in this sense of openness and, if given the space to develop in this way, we can encourage in them this natural sensibility.

We also needed to maintain respect with each other and with Nature during our park picnic days. I realized that what we were doing was different than the “free-range child” philosophy that is becoming popular these days, in which children are encouraged to wander in nature out of concern for the amount of hovering and over-scheduling that many young children experience today. It is truly an art to maintain awareness of children in our care and, at the same time, give them the freedom to explore and discover. This breathing out is essential to a sense of wonder. Betty Staley has a book for those working with teens, Between Form and Freedom. We felt we were holding the young children with the same mood she speaks of in her book, without which children can easily spin out in open, over-crowded spaces.

Singing our snack verses and ending the days with our story time helped us to weave a rhythm into our park days. These cues help children feel anchored and secure in
a familiar rhythm while in a new, open expanse like the park. At the end of the last day there, we carried our watercolor bird mobiles in procession, singing and weaving our way among the trees on the edge of the field and playground, then onto the pathway leading to a great log on the edge of the marshlands.  There we crossed over the log with concentrated balance, holding our bird mobiles and singing, “Spreading my Long-Winged Feathers As I Fly,” a favorite circle song among the children.

Engaging our senses fully each day and coming together again to connect for lunch at the end of our day, we shared our familiar songs and verses to bless the food, “For the Golden Sun” and “Earth Who Gives to us this Food.” The children settled again as we came together. I noticed one child from the community came to join us at story time and nestled in the back of our little flock of LifeWays’ children enjoying the story. A dragonfly flew overhead and hovered there with us.

At lunch, one child in our circle noticed the shimmering light on her apricot as she bit into it and announced with delight, “Look it is shimmering.”  Another child wanted us to enjoy the plum he had picked special for the last day from the tree his father planted in their garden…and wanted to know about its sweetness. In this way the children brought us back to our spring festival closure…”to remember the sweetness of life and our time together.”

Note: Our intention as early childhood educators is to protect the natural sense of wonder and openness in young children. We do not over-intellectualize with them while exploring and playing. Young children live in their imagination and we support this through story and play-based learning. For adults it is wonderful also to know some of the history of the Corte Madera Watershed and to marvel at its diversity. Here are some of the plants and animals that thrive in the watershed.

Our watershed provides habitat to species that have adapted well to urban and suburban development, including mule deer, raccoon, opossum, skunks, numerous birds, and a variety of reptiles and amphibians. Mountain lions, coyotes and river otters are occasional visitors. The federally endangered California clapper rail and salt marsh harvest mouse and the threatened northern spotted owl occur in the watershed. Over the years, sightings of adult steelhead (Oncorhynchus mykiss), coho salmon (O. kisutch) and Chinook salmon (O. tshawytscha) have been reported for the Corte Madera Creek watershed. It is possible that some of the adult fish found in Corte Madera Creek watershed are rainbow trout.