There we were having breakfast in a homeless shelter in San Francisco that also housed a Waldorf preschool.  We were so impressed by the shelter and the homelike quality of the space.  That morning our conversation revolved around the development of full-day care for young children in spaces that felt like a loving home and represented principles of care that reflected the human development studies of Rudolf Steiner.  What would the activities be in such places, and what might we call them.  Rena astutely said, “Well they would be places based on the ways of life.”   Then the trumpet sounded and one or both of us said, “LifeWays!”  You know the rest of that story. We gathered loving approval from all our colleagues here and in Great Britain who had used the name Lifeways for other bodies of work and continued our year of visiting conventional and other child care centers to get a feel for what was happening in that world.

Working with Rena was always such a joy.  Her laugh was musical and generous.  Her capacity for listening was almost unmatchable. And her care and concern for others was genuine and full of compassion.  Her biography had its own stories of heartbreak and hard work.  Yet, she was loathe to ever burden anyone with her challenges.  Rather, she preferred to listen and support others.  Perhaps that is why it was over a month after she received her cancer diagnosis before she told me about it.  Diagnosed mid-August, Rena crossed the threshold in mid-October.  Her beloved sister said that she simply drifted away in her sleep.

Rena was a Waldorf early childhood teacher for decades.  When we first met (probably in 1997) she was leaving Pine Hill Waldorf School in New Hampshire to research working with and supporting families, particularly those with children from birth to three, and I was leaving Prairie Waldorf School in Wisconsin to research child care outside of the home.  I loved her the moment I met her and was delighted when she joined the national Waldorf Kindergarten Association board (later to become WECAN) on which I also served.  We laughed – a lot – and usually managed to get lost every time we traveled together.  It was always an adventure.

Rena was a researcher and wrote her Masters thesis at Antioch University on brain development.  She was an accomplished adult educator, often teaching for Antioch or Center for Anthroposophy in New Hampshire, the Waldorf Institute of Southern California, LifeWays North America and others.  For a few years she was the Director of Early Childhood Teacher Training at Rudolf Steiner College in California before life called her to Florida to be with family.  Always a worker bee (although to me she was a queen), Rena even did a stint working as a barista at a coffee shop when she first moved, as there was no Waldorf School nearby for her to work.  She chortled as she shared with me her first day on the job working the window orders, asking if I had ever seen the hysterically-funny I Love Lucy show where Lucy and Ethel were working at a candy factory and could not keep up with the line.  She noted that represented her trying to keep up with the coffee orders.  Clearly she figured it out as they spoke of promoting her to manager.

Waldorf education, however, was her passion; thus, she became the founding teacher of Sea Star in Boca Raton which has grown to be a thriving Waldorf School.  Rena had just retired from full-time teaching with plans to do more parenting work when she became ill.

Mentor to many, teacher to hundreds of children (at the very least), adult educator, mother to two sons and grandmother to two grandsons, loving sister and benevolent friend, Rena will be sorely missed here on the planet.

It was heartwarming to think about Joan Almon greeting Rena as she crossed over to enter her starry journey.  I know other loving colleagues who were likely there as well.  May we know the blessings of having these shining lights, expanding into the universe, to support and encourage us along the way.  I dedicate this verse from Rudolf Steiner to these great souls. 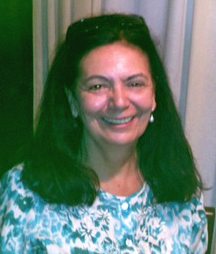 Upward to you strive the love of my soul

Upward to you flow the stream of my love!

May they sustain you

May they enfold you

In heights of hope

In spheres of love.