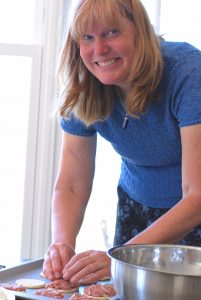 Kneading the dough for sfiha, a Lebanese dish, with my nieces ages 2, 4 and 10, I notice how their temperaments are reflected in the way they work the dough. The ten-year-old has special needs, so her skills are those of a much younger child, but her will forces are as strong as anyone’s as she pushes and manipulates the dough like she’s been doing this for decades. 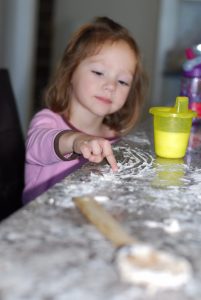 The little ones really enjoy adding ingredients, but when it comes to actually taking the dough into their hands and pushing it with the heels of their hands, they are not so eager. Tentatively poking it with one finger, the two-year-old declares she is finished, while the four-year-old hangs around for a bit longer in case there might be chocolate chips involved.

My sister-in-law, who is truly of Lebanese heritage and not an in-law poser like me, walks by and says, “Don’t forget to make the sign of the Cross in the dough.” I can’t forget, because it’s actually written into Aunt Janie’s recipe on the card, just below “oil the bowl and put the dough in to rest for two hours.” One of the things that makes this food taste so good is the intentionality and love that permeates the food. You really can’t go wrong with a recipe that mandates blessing the food during its preparation.

These recipes take time, and lots of it, so we are making a Lebanese feast on our family vacation because it is one of those rare occasions when time is plentiful and so are hands to prepare the foods. 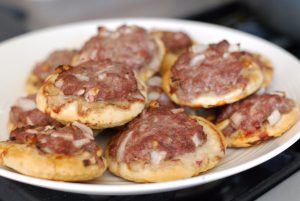 I read once that at this point in our human history we spend less time and money on our food as a percentage of our income and our daily routine than at any time before. I believe it, because I can’t imagine how many hours of the day my husband’s grandmother must have devoted to the preparation of these traditional foods.

A few years back, I spotted a cookbook at a rummage sale for a dollar. The cookbook was a prize for the inexpensive price tag. Dog-eared and well-loved, it is a binder style collection of recipes with the Better Homes and Gardens logo on the front. The initial pages in the book were published in 1950, while the remainder are clippings from the magazine over the years. The original owner added recipes to this particular cookbook for thirty years, resulting in a thick treasure trove of culinary history as seen through the lens of one Better Home and Gardens subscriber. Paging through the cookbook in the driveway belonging to the woman’s daughter, who was liquidating the final vestiges of her mother’s life along with costume jewelry, porcelain knick knacks and other household miscellany, it promised to be a rich and revealing window into a typical American kitchen. I eagerly scooped it up.

After taking the cookbook home and sitting down with it over a cup of tea, I examined it more closely. It was indexed by type of food, including a few chapters not normally found in modern cookbooks, like the one for “Aspics and Gelatins.” Each recipe included the month and year it was published in the magazine, and going through the recipes decade by decade offered a thought provoking journey through our common food culture.

Beginning with the original pages from the 1950’s, I note that the recipes are simple. No fancy ingredients here like champagne vinegar or quinoa. These recipes include basic foods that every housewife would have had in her pantry. For the most part, the resulting dishes are comprised of economical real foods, simply prepared, the kind that could feed a hungry brood for a few dollars and leave everyone satisfied and healthy, even if they are not necessarily inspiring gustatory poetry. These are the kinds of foods the kids would gulp down as quickly as possible so they could get back outside to play with their friends, along with a few fun treats thrown in for special occasions, like “Ragedy Ann Salad,” whose body is made with a canned peach half, arms and legs of celery stalks, head formed by a hard-boiled egg topped with hair of thin slices of cheddar cheese, and a skirt of curly lettuce to complete the ensemble. Or “Three Men in a Boat” comprised of half of a baked potato for the boat, wooden toothpicks holding cheese slices for sails, and three button mushrooms for the little men.

Journeying on to the recipes from the 1960’s, brand names begin to make their way into the magazine’s recipes. Kraft, Del Monte and Libby’s have discovered Madison Avenue, and are intent on capturing their portion of the market share by suggesting recipes that use their products. Julia Child’s revolution of French cooking did not seem to influence Better Homes and Gardens’ recipes, or at least the ones in this cook’s collection, as these feature strange ways to prepare chicken, the domination of Jell-O, and the introduction of French Onion Dip (using Lipton Onion Soup, of course.) For the most part, though, the recipes focus on stick-to-your-ribs healthy foods that can be inexpensively prepared and are based on mostly real ingredients with a few packaged conveniences thrown in for flavor and variety.

Then come the recipes from the ’70s. Did every housewife go back to work? Or was the sexual revolution of the ’60s just so powerful that it boggled their ever-cooking minds? Because the American diet just goes to hell in a handbasket, at least according to this cook’s recipe collection. Cheez Whiz Dumpling Soup, 50 Ways to use Velveeta, and Spam Hostess Salad are just some of the culinary delights that dance across the pages of the 1970’s Better Homes and Gardens magazine.  I actually remember some of these oldies but goodies from my own childhood, like the casserole composed of tater tots on the bottom, covered with a can of green beans, topped off with a pound of ground beef and a can of Campbell’s Cream of Mushroom soup, and sometimes – if we were feeling fancy – sprinkled with Durkee’s French Fried Onions. The fact that my mother tried to pass this off as food did not fool me. I refused to eat the stuff, and sat at the table for as long as it took for her to get tired of waiting for me to clean my plate, releasing me from culinary prison so I could go play.

Looking at the food landscape of today, we seem to have the whole gamut available to us as consumers. Over-processed foods that hold little to no nutritional value, along with a resurgence of traditional, whole foods and a range of special diets that can make your head spin: gluten-free, vegan, paleo, fermented, raw, free-range, organic, the list goes on and on as we try to figure out the best way of preparing and eating for ourselves and our children.

When I think back on my 50-plus years as an eater, I am coming to understand that there are very few foods that can simply be called “good” or “bad.” A bucket of fried chicken eaten on a picnic blanket with friends you love can be the best meal you’ve had in a long time simply because of the company. Gathering as a family or a community, no matter what you are eating, can feed the soul in ways that go much deeper than the nutritional content of the food. In fact, my favorite meal of the year is our giant potluck dinner that precedes our annual Paradise Farm barn dance for family and friends. 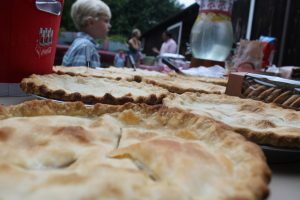 Giant warmers filled with some kind of meat to put on a bun mingle with bowls and plates and platters of dishes-to-pass that range from amazing salads assembled by healthful foodie friends to bags of Oreos scooped up at WalMart on the way, and they are all shared with joy and delight by a community gathered to give thanks for another year of life well-lived. May we continue to remember to bless our food with gratitude and share it with generosity.

Blessings on our meal and peace on earth.

Mary O’Connell lives and cooks in Wauwatosa, Wisconsin.  She is Training Coordinator and Board president of LifeWays North America.