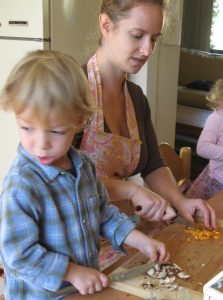 As a LifeWays-inspired parenting coach and teacher of caregivers, I’ve worked with families and caregivers from many geographic areas and walks of life: mothers, fathers, married and unmarried, grandparents, nannies, caregivers, and teachers, in the U.S., England, Europe, Australia, even the Middle East and Israel. Although their homes and schools look different, all have shared a deep desire to nurture and protect the children in their care, a desire for beauty and spaciousness in their lives, and perhaps more than anything, a desire to enjoy their time with their young children.

As I’ve offered suggestions to families and gotten ongoing feedback about what worked and what didn’t, I’ve been able to hone some ideas and crystalize my message, and now I have the privilege of writing a book (to be published Fall 2017 by Hohm Press): Joyful Toddlers & Preschoolers: Create a Life that You and Your Child Both Love. This is an excerpt from Chapter 2:

When I ask the question, “Why do toddlers and preschooler say No to us?” in talks and workshops, the answers I get tend to run along these lines:

As sensible as these answers sound, I’d like to suggest an alternative perspective (or mindset) that has the ability to change your day-to-day interactions with your child in an enormously powerful way. This new mindset starts with the idea that, while the answers given in the list above are indeed important developmental undertakings during the toddler years, they are actually not the reasons that children say no to us the vast majority of the time. In fact, I propose that most of the time when children say no to us, what they are really saying is, “I don’t feel as connected to you right now as I wish I did.” If we are able to hear this when they say no, our responses can more easily change so we’ll be less likely to get into power struggles. Our days can go more smoothly and be more enjoyable.

Let’s look at the following interaction with the new mindset that many no’s are really requests for connection, rather than requests for independence. We set the stage with Ashley (age two years eight months) and her mom:

“Ashley, it’s time for us to put our jackets on!”

“What?!” Mom puts her hands to her cheeks with a shocked expression on her face. Ashley looks at her mom with a devilish glint in her eye, and her mother responds by stretching her hands out and wiggling her fingers, leaning forward and saying, “I’m gonna get you! I’m gonna get you!”

Ashley shrieks happily and runs away. They play chase for a moment, and then Mom picks her up and slings her over her shoulder. As she walks to the coats, she turns from side to side, saying, “Where’s Ashley? Where did she go? I know she was here a minute ago!” Giggles emanate from behind her back. Mom puts her down and says, with exaggerated surprise, “Hey, how did you get here?!” More giggles.

Mom takes Ashley’s jacket down from its hook and Ashley hides her hands. Mom ignores this action and instead sticks her own hand up the cuff of the sleeve, wiggling it around and saying, “Cheep-cheep! Cheep-cheep!” She looks at Ashley in mock amazement. “What’s that? Is there something in your jacket sleeve?” She wiggles her hand again. Ashley looks intrigued, and when Mom opens the coat, Ashley puts her arm in the sleeve, reaching down toward the hand. As one hand nearly touches the other, Mom pulls her own hand out and lets it flutter away, whistling a little birdy tune. “A bird in your sleeve!” She and Ashley share a happy smile.

“Do it again!” Ashley exclaims, holding out the other sleeve. They go through the exact same routine with the other sleeve, and then Mom starts the zipper and holds the bottom so Ashley can pull it up the rest of the way. They slip their shoes on and go to the door, where Mom pauses.

“Are you ready?” she asks, making eye contact. Ashley nods eagerly, clearly aware of what’s about to happen. Mom opens the door and they break into a rendition of I’ve Been Working On the Railroad together, and march out the door, knees high.

Does this type of scene feel familiar? Or does it seem like that mysterious “toddler magic” that some people have, but is totally out of reach for you? In fact, what is it that makes it “toddler magic,” and why does it work? Perhaps, rather than seeming like “toddler magic,” this interaction between Ashley and Mom seems more like rewarding bad behavior, or raising a child for whom saying no becomes too much fun. We’ll discuss how to avoid that last pitfall later in the chapter, but for now let’s look at why Ashley is happy to go along with her mother’s response.

When Mom turns getting ready to go into a game, Ashley’s resistance melts away. Not because Ashley no longer cares about differentiating herself from her mother. Not because she no longer needs firm boundaries. Nor is her mother somehow tricking her, or distracting her into forgetting her own needs. Although Ashley started out with a negative response, she ends up happy to go along with what her mom has asked because her mom has responded positively to her request for connection, which Ashley had voiced by saying no. Once mom has been responsive to Ashley, Ashley is able to be responsive to her mother in return. (Fun and games are not the only way to connect with children; we’ll go over examples of many different ways below.)

Not quite convinced? Let’s think about an alternate scenario, where Ashley’s mother is tired, or in a hurry, or just doesn’t have the energy for chasing-games and imaginary birds and song-singing. This time, when Ashley says no, Mom gets serious. She looks Ashley in the eye and says in a stern tone, “Ashley, it’s time to go. Come get your coat on, right now.” Mom picks up the coat and holds it out. If Ashley were really asking for boundaries, don’t you think that this firm stance would make her feel reassured? But it doesn’t reassure her. Instead, her response is likely to range somewhere between grudging acceptance and a full-on meltdown complete with Mom stuffing her daughter’s arms into the coat and carrying her to the car because she won’t get her shoes on.

When we meet a child’s no with firmness or impatience, the intense negative reaction we can get often takes us by surprise. A complete meltdown because we asked her to put her jacket on? By translating no into “I don’t feel as connected to you right now as I wish I did,” a lot of pieces can click into place. If the child is truly asking for connection, that response starts to make more sense. Consider how you might feel if something similar happened to you:

Imagine that you’re feeling distant from your spouse or partner. Perhaps he or she has been extra busy lately, spending more and more time on the computer. Finally, one evening, you take a deep breath and say, “Honey, I’ve been feeling really disconnected lately. Will you put your work down for a moment and just give me a hug?” Instead of stopping and hugging you, however, your spouse looks up with a sigh and bit of an eye-roll and says, “I really just don’t have time for this right now. Why are you always doing this? Can’t you see I’m busy?”

Ouch. When we screw up our courage to ask for connection and we’re rebuffed, it’s not fun. We might even feel like having a bit of a meltdown ourselves. Imagine how much better it would be if, instead, your partner looked up at you and said, “Thanks for reminding me to take a little break. I love you so much,” and then he or she got up from the computer and gave you a juicy, heart-felt hug. Your partner might still need to keep working on the computer after that, but perhaps you wouldn’t mind so much, once your sense of connection had been restored. The same thing is true for children. We don’t need to connect deeply with them in every moment; rather, we need to give them a few moments of real connection when they let us know that they need it. 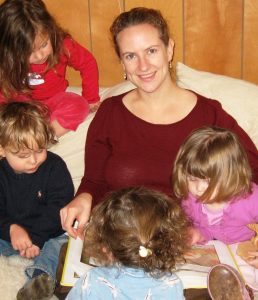 My book, Joyful Toddlers & Preschoolers: Create a Life That You and Your Child Both Love, will be available on Amazon and through my website, starting October 2017. Please visit me at http://joyfultoddlers.com